Census Regions – What it means for Hispanics Sample

Census regions are probably the last thing you think about when procuring Hispanic sample. Language, acculturation, and country of origin are likely at the top of your list. However, census regions are linked to all of the above. 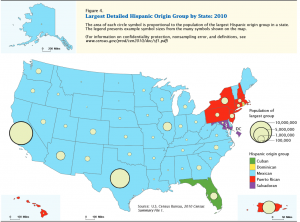 Census region distribution has significant impact on a panel’s representativeness. For example, If we take a look at the largest census regions for Hispanics, the west, you’ll see that country of origin is majority Mexico and you’ll see a larger percentage of foreign born Hispanics. This is very different than Hispanics that reside in the south for example that are largely of Cuban decent, and have been here for many generations.

Many issues can arise by tapping into a panel that does not keep a close eye on census region distribution. If you decided to start a Hispanic panel today and allowed any person of Hispanic decent to register without keeping tabs on how your census distribution was falling out, you’d end up with a panel heavily skewed towards the northeast and the south, a direct inversion of the Hispanic population at large. This natural skew would occur because of the higher percentage of internet penetration in these regions linked to higher income and higher education among this Hispanic cohort.

Census region distribution is critical to researchers in the sample industry as it could be the difference between closing a tough quota and ending up short. Be sure to check with your Hispanic panel partner regarding their Hispanic census distribution to ensure success on your next project.