How Mobile Surveys Can Help You Get Reponses 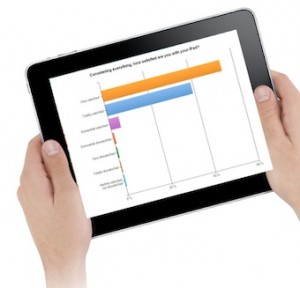 Survey research is not what it used to be. And chances are, it will continue to evolve with the popularity of smart phones, iPads and the like. In fact, 46% of Americans are using smart phones. So why not use this technology to help enhance your survey response rates and data gathering techniques?

QuestionPro has debuted a new online survey tool to help you conduct surveys using smart phones and iPads, and even when there is no connection to the Internet. SurveyPocket is a mobile survey application that allows for the gathering of survey data in the field by using a smart phone or iPad as the data-gathering equipment piece. The application is an innovative tool that helps you collect and store data – with or without a wireless connection.

What is the best application for SurveyPocket?

On-site Surveys – Using mobile devices, you can send out a team of interviewers to an event where you gather the survey responses live. Examples of these include prospect information gathering at trade shows, customer satisfaction surveys at movies or entertainment venues, and political exit polls.

Training and Evaluations – Use SurveyPocket to collect feedback after a training session or workshop. Gathering the data at the heel of the session will ensure the most accurate responses.

Personal Mall Intercept Survey – Mall intercept surveys are used to reach a large segment of the population. Given that approximately 2/3 of U.S. households shop at a mall during any given two-week period, using SurveyPocket for mall intercept surveys is a great way to gather information from the masses.

There are several features that make SurveyPocket a great mobile survey tool, including …

Another great feature of SurveyPocket is it works exclusively with the SurveyAnalytics survey platform.

Do not limit yourself to the old ways of collecting survey data. If you are collecting data in the field, consider QuestionPro’s SurveyPocket as a way of gathering accurate data quickly and effectively, without the hassle of being wired in.