Why the mobile world needs competition

To say the mobile world is large is an understatement. Available devices are in the thousands, and users in the billions — but when you take a practical look at it then it’s really a market of two. The two being Android and iOS. These two rule the roost with 96% of the market and the rest of divided between Windows, Blackberry and others. I do not believe this is a good thing.

I was playing with SailFish and Ubuntu last week and was blown away by how they worked. They had 0 buttons to be pressed, the interface is made out of swipe gestures completely. SailFish lays out open apps on your home grid in their full glory. Android and iOS have their own style but some things just make sense in SailFish and Ubuntu like pull down to change a quick setting instead of buttons. For example, you pull down a little then it toggles sound, a bit more and it’s Wi-Fi.

Now when I look back at the differences between the versions of iOS and Android there was always something really significant changed… until now! The additions now feel like natural evolution instead of a cataclysmic change like it used to be in the past. I think the reason for this is the lack of competition. iOS and Android have no fears of being beaten so they take it eas 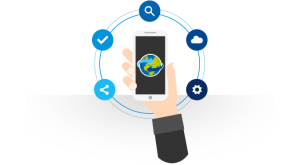 y. Competition in general forces companies to do the following:

From a user’s perspective competition gives them quite a few advantages like the following because of the above:

In conclusion, I would like to say that we need competition. Even if you have a favorite platform give the others a look if not a shot. There are awesome things hidden in the dark.