When we present survey data we have choices in how that data is presented. As survey analysts, it is our role to present the facts in an unbiased manner which facilitates decision making. When working with scaled questions, “e.g. How likely are you to recommend Acme, Inc.?” there are numerous options in how the data can be expressed. For example, Statistics 101 reminds us we can use the mean, median, mode or some combination of these. However, savvy analysts have another tool – the top-box score.

The top-box score is a favorite in both the consumer and B2B market research world. For a refresher, the top-box score is the sum of percentages for the top one, two or three highest points on a purchase intent, satisfaction or awareness scale. By ‘top’ it is assumed to be the most favorable points on the scale (most likely to recommend, re-purchase, most satisfied, etc.) It is an alternative to the use of the mean score for the scale. The picture below highlights both the top and bottom boxes. This allows the researcher to visually assess the ratio of top-box scores (most favorable) with the bottom-box scores (least favorable). 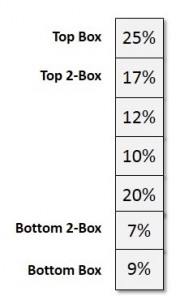 The top-two box score is 42% compared to a bottom-two score of 16%. In short, there are 2.6 times as many respondents that rated you favorably compared to those who rated you negatively.

Use of top-box measures is a valid stand-alone approach, or they can be coupled with traditional measures such as the mean or median. In fact, it is critical if we are comparing multiple competitors or multiple waves of the same survey to look beyond the simple. You can have scores for competitors which have the same average (mean), but may have varying percentages of respondents who have given the top or top-two box rating.

The key takeaway is this – there are numerous ways to measure and report survey data. Consider using two or more measures including the mean and top or top-two box percent. This allows the consumer of your survey data analysis to make more informed decisions based on your reporting.