The Super Bowl is by far the most watched sporting event on American television year-after-year. Yet after high-profile scandals such as Deflategate and the Ray Rice incident, the NFL is as popular as ever.

The Super Bowl is an advertising juggernaut and festival bonanza that draws people in from all parts of the country. This year, sports fans and corporate executives are descending upon California’s Silicon Valley to see the Carolina Panthers and Denver Broncos battle for the Lombardi trophy, sports ultimate prize. However over the past couple of years, high-profile controversies have embroiled the NFL in some serious PR issues. Within the past two years, the NFL has dealt with Deflategate, the Ray Rice incident, and the CTE denial. The NFL was even the bad guy in the latest Will Smith movie.

But despite these issues coming front and center, according to a joint study by QSample and QuestionPro, this has not affected the NFL brand. The Super Bowl is as popular as ever and is still considered to be a family affair. The joint study conducted by QSample and QuestionPro surveyed more than 300 panelists from a general population sample. Ninety-nine percent of respondents said they would watch Super Bowl 50, another exclamation point to the popularity of this quasi-holiday.

The Super Bowl is famed for being a spectacular state of sports, entertainment, and advertising. Let’s see if that still holds true:
1. 39% of them say they watch it for the game.
2. 22% enjoy because they consider it as a social event.
3. 7% of the crowd watches because of the commercials.
4. 1% prefers the halftime show.
5. 31% all of the above
As far as interest levels, one ought to wonder if the halftime show might garner more significance if an American or more blue-collar act than Coldplay was performing. As far as commercials, the low percentage may not bode well with advertisers spending a record $377 million for Super Bowl 50.

When asked which location is the best for watching the SuperBowl game on Sunday, we got some interesting answers:
1. 78% of them they want to be comfortable on their couch at home
2. 12% prefer to party while watching the match.
3. 6% would love to chill at a bar or a restaurant and watch the match. 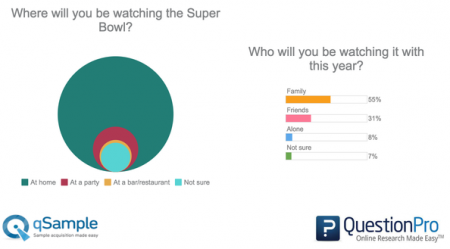 Adding on to this, 53% of respondents said they would spend the night with family members. 32% prefer friends. 8% percent will watch the Super Bowl alone. 91% of all participants will watch the game on television. According to the data the recent NFL controversies like Deflategate and the Ray Rice scandal does not affect the view of the NFL as a brand, as shown in this graph: 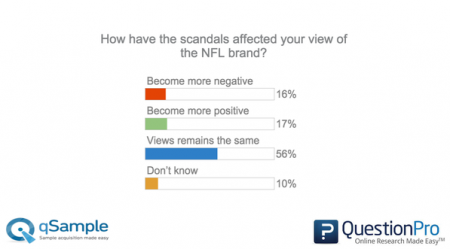 Keeping this in mind and considering that nine out of ten most-viewed shows in history are Super Bowls—and that last year’s game was the highest-rated Super Bowl—the viewership this year should also be extremely high. 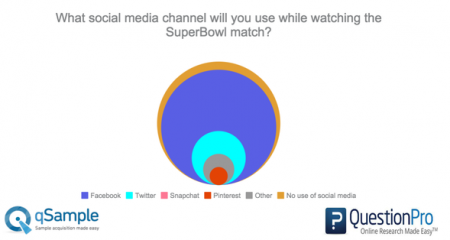 Speaking of engagement, there are social critics who propose that the Monday following any Super Bowl should be a national holiday. The study found that 26% of respondents would not go to work after the game. Additionally, it’s estimated that last year 1.5 million people missed work the day after Super Bowl (at a loss of roughly 12 million hours of productivity for that Monday) while 4.4 million workers showed up late to their jobs.

What about the game itself? Is there a favorite team to win the Super Bowl, according to the study? Indeed, there is, with respondents giving the edge to the Broncos over the Panthers (45% to 41%, with 14% of the remaining respondents not sure).
Unfortunately for our sake, survey’s can only go so far in determining the winner. But that’s why they play the game. Super Bowl Sunday will be a showcase of amazing new products, inventive ad campaigns, and be a way to spend time with friends and family. Perhaps even Coldplay will be the main highlight. But most of all you might get a new reason to take off on Monday and that’s the biggest victory for all

Conducting surveys can help you bring the real insights. Learn how to create great survey questions