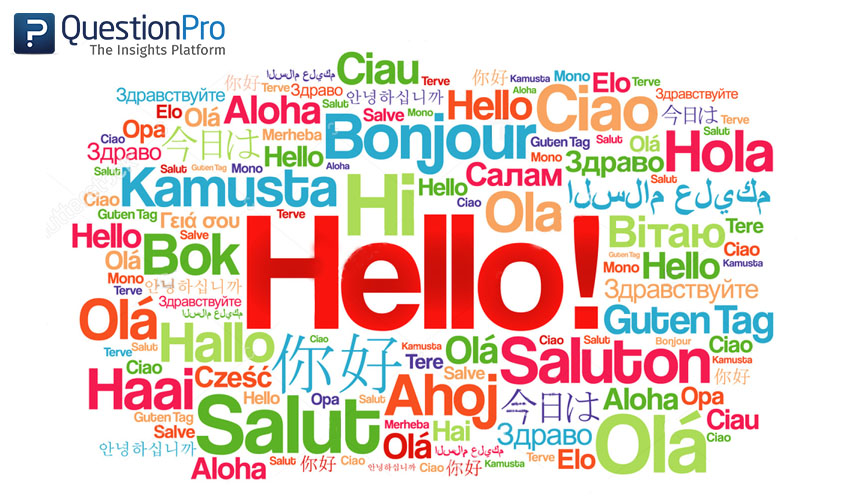 While English may dominate most of the landscape of the World, if you are a growing business you will need to tap into audience that cross geographies and national borders. With that, comes the need to communicate in their native language for maximum reach and accurate survey responses.

That’s why QuestionPro surveys can be created and distributed in over 108 languages from around the World!

Creating and deploying a new survey in your choice of languages is really simple. In just a few steps, we will show you how you can create, send and collect responses to multi-lingual surveys like a real pro using QuestionPro!

Here is how to go about it:

Step 1. Create a survey in English or your default language.

Step 2. Select the “Language” option bar from the menu. Initially it will show your “default language”.

Step 3. Now click on the “Add Other Languages” tab on the upper right corner of the page. A pop up will open which will give you a wide range of language selection option. Select the languages that you would like to deploy your survey in and click on “Save Changes”.

Step 4. The next screen that appears will allow you to add manual translation to your questions. Each tab is separate for the number of languages that you had earlier selected. On selecting any of the tabs, you will see a form which has 2 sections – The boxed on the left carry the original text, the ones of the right are for you to enter the translation.

On distribution of the survey, users will be able to see the different language versions of the survey questions in one screen. However, if you have added more than 1 additional language, it is advised to use a branching logic to take users directly to the translated version of the survey.