Are you in 7th Heaven? – Save reports to Dropbox and Google Docs in the Cloud 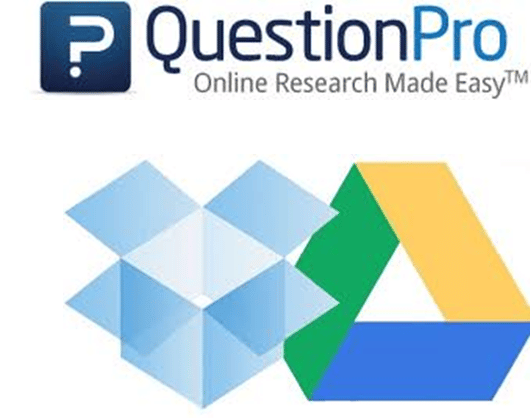 Sharing online survey reports and data when everyone is on the go can get rather difficult.  Although QuestionPro’s report sharing features and link sharing to online reports is old hat.  Most of us users wanted more.  We wanted the ability to not just look at the data, but to work with it, share it with virtual teams without getting lost in the proliferation of spreadsheets and multiple versions.

Thankfully the team over at QuestionPro has heard the prayers and requests of their customers (me for one) and added this terrific feature that allows you to send your reports DIRECTLY to the cloud — either to Google Docs or to Drop Box.

The integration is seamless — all you need is an account with either Google Apps (or Google Drive) and DropBox.  The rest is “easy-peasy” as they say.

What do you get when you integrate the concept of Google Docs with Dropbox? The new Google Drive, which was launched recently by the search giant itself.  Google Drive is a step above their popular Google Docs program and is already gaining momentum among users and companies. But how does it compare to Dropbox, another cloud-based storage system with plenty of users and funding to boot?
One key difference between the cloud systems is the audience for which each is intended. Google appears to be aiming the Drive service at companies and current Google Docs users. In fact, to most current Google Docs users, the new Drive looks more like an upgrade than a new service.

Dropbox started out – and still is – geared toward the consumer user rather than big corporations. Its cloud storage allows users to save photos, documents and videos to their Dropbox folders from any computer. The system automatically saves to all your computers, phones and the Dropbox website.

Pricing
The two cloud providers do vary when it comes to space allocation and pricing. Google Drive provides the first 5GB of storage for free. Users can add 25GB for $2.49 per month, or 400GB for $19.99 a month (with levels in between).

Dropbox gives user the first 2GB of storage free and also offers a referral program for additional free storage. Their Pro 50 plan gives the user 50GB of space for $9.99 per month. And the Pro 100 provides 100GB for $19.99 per month.

Both Google Drive and Dropbox offer great features and affordable cloud storage solutions. Dropbox is currently at an advantage since it can be accessed from nearly every mobile and desktop platform. Google Drive, however, has more flexible storage plans and pricing, and includes Google’s deep search integration.

It does not look like Google Drive will overtake Dropbox’s popularity in the immediate future. In reality, it’s more likely to see more cloud services being used by more users overall, than the shifting of one platform to another.

The good news for you is that you can use either of these platforms to store and share your online survey data.