Booze Initiative – Pre-Election Poll Nailed It… and Much More 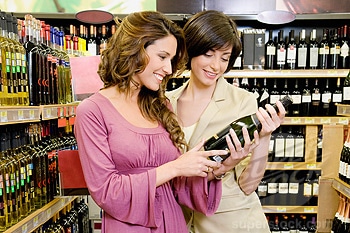 Before Election Day this month, if you wanted to know how voters would weigh in on privatizing liquor sales, all you had to do was ask.

You see in WA state, we can only buy booze from state controlled liquor shops. There was a voter ballot initiative to overturn this.

And that’s not all. We’re really fired up because this was a totally new way of polling voters. And it worked so well, public opinion research will never be the same.
Here’s what happened. Back in late October thru early November, we asked likely voters in Seattle/King County how they’d vote on various things. The liquor initiative, I-1183, was one of the most hotly contested issues. It called for privatizing Washington State’s government-run liquor sales.

Not surprisingly, voters in the nation’s latte-guzzling capital said they’d overwhelmingly back the measure. After all, when you need Irish Coffee fixings, you need them now – not just when state liquor stores are open. 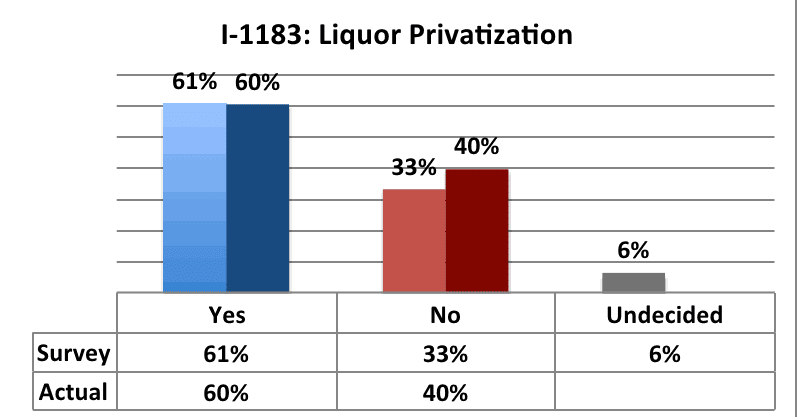 In other words, we knew I-1183 would pass hands-down. And by how much. And we knew the outcome of other issues, with impressive accuracy.

Could the results have been a coincidence? Anyone can make predictions, but how do you know if your method is sound?

One way to test the method is to see how closely survey respondents represent likely voters as a group. In our case, the answer is: awfully close. If you look at party affiliation, age and gender, participants in our poll are a near-perfect match for the likely voter base.

So, what’s the upshot of all this? It’s more than about calling the outcome of the liquor initiative. And it’s more than being able to predict other results this year.

It’s about speed and cost.

That’s where we’re really excited. You see, our approach is actually an innovative, new way of doing surveys. This wasn’t a telephone poll, which normally costs upwards of $20K for a sample of 2,000+ voters. And unlike phone surveys, ours can be done in just hours, rather than weeks.

We did it online. We tracked down email addresses for about 10% of King County likely voters. We invited them to share their opinions using QuestionPro.com survey software. And within just 48 hours, we had answers from voters random enough to represent the electorate.  With the QuestionPro reporting suite, there was no need to download data and crunch the numbers either, we simply signed on and monitored results real time.

It’s not just about responding online, either. We’ve got apps. So, through our SurveySwipe platform, voters can complete a survey wherever they are. At their computer. On the bus on their smartphone. Or at a cafe on their tablet device. That’s why we can get results back fast. You don’t have to spend 10-20 minutes on the phone with some low-paid survey taker. Or, worse, a robot.

Next Post : We’ll be sharing a detailed SPSS data file of this groundbreaking project and its implications.

The revolution in public opinion surveys has begun….

PS: Shameless plug – If you are a Seattle/King County pollster – now that we have our Voter Panel – please contact us if you want to run your own message testing and polling for your candidate for 2012! Please contact surveys@cityfeedback.com if you would like to use our King County and Seattle Voter panels.