QuestionPro’s Twitter integration within the Idea Board of Communities has quickly become one of QuestionPro’s most popular features. This feature allows companies to engage in meaningful ways with their customers/followers on Twitter. Since there is no shortage of insights and ideas being shared on Twitter, there’s a need to compile these ideas and make sense of them all. Furthermore, having meaningful engagement with those ideas is even more of a challenge. This is where the Twitter integration with QuestionPro Communities comes in play.

With this feature, users can tweet at a specific handle using predefined hashtags like #Ideas or #Feedback in the tweet. Then when the Twitter handle and specific hashtags are used, this idea, feedback, or insight is then created as a new idea on the Idea Board. The user then gets a reply on Twitter, letting them know that the idea was captured and added to the Idea Board. The user then gets the opportunity to sign up to be apart of the community as well.

Here’s an example of how it works:

This is a brand new way to get feedback from your customers. As you’ve heard and likely know, social media is an important medium and one where customers are paying lots of attention. While they are paying attention on Twitter, you want to make sure that they have the ability to provide purposeful feedback. The ability to achieve this and get this feedback from an essential medium is a true game changer.

If you’re interested in learning more, you can find this in the Help Center & Knowledgebase Article: https://www.questionpro.com/help/communities/861.html

Got an idea on how we can we make this feature even better? Post it on QuestionPro Ideas!
QuestionPro Idea – https://ideas.questionpro.com/a/shIdea/20654-403

As you very well know, we have an expansive information architecture involved with the Communities product line, so decided to look at the product holistically and do some conceptual thinking to truly create the best user experience. We have streamlined both terminology and organization of content in the menu sections, including the Dashboard, Settings, Languages, Images, Members, and Recruitment sections. 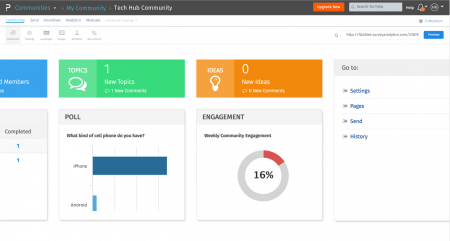