There has been a lot of chatter around “Cloud computing” recently. Microsoft recently jumped into the bandwagon with their launch of Azure Platform and of course Amazon has been doing utility computing via Amazon S3 for almost 2 years now. Google has it’s AppEngine platform and our favorite Salesforce has force.com – Lots of hype and buzz.

OK – What does that mean to your surveys and services that we offer. We’ve always believed in the SaaS model from day 1 – ok – we tried experimenting with deploying QuestionPro on as a server solution, early on when we launched QP, on customer premises – we failed miserably and it cost everyone an arm and a leg. Lessons in entrepreneurship – Fail often and fail fast!

We think the next chapter will be about cloud connectors! Data in the cloud is almost a given now. The question now becomes how will the system in the cloud talk to each other, or how effeciently can services and data interoperate with each other.

Salesforce.comWe had taken the first step in this direction – a small but significant one – The QuestionPro -> Salesforce.com integration is an example of a cloud connector. Your CRM Data is in Salesforce.com and Survey Data in QuestionPro.com — Joining the two together makes sense. What is more important, that we changed recently is that we allowed all QuestionPro licenses (even the Web Professional $15/Month) license to have the Salesforce integration enabled — Scott’s post on Dreamforce and new Salesforce.com  pricing.

QuestionPro.com and IdeaScale.com
This is an easy one – Since we own both the services! We’ve now lauched the integration of IdeaScale with QuestionPro – You can deploy surveys to your IdeaScale community directly. See screenshot below:

Upcoming Cloud Connectors:
This is really up to you. If you’d like us to integrate with other web systems, please feel free to post ideas on our QuestionPro ideascale portal (https://questionpro.ideascale.com) — we’re converging all feature and system requests there and will pick from there and move forward.

For now we have the following in mind:

Conference Update
As some of you probably know, we are at Dreamforce @ San Franscisco – I’ll be down there tomorrow attending DreamForce and Web 2.0 summit for the next couple of days. We’ll be meeting up and going for some quick drinks after the conference tomorrow. Please feel free to twitter me @questionpro – if you are in the conference (or in downtown SF) and we can invite you to come have drinks with us (we’ll pay of course!) Here is Scott (Left) and Rob (Right) @ DreamForce : 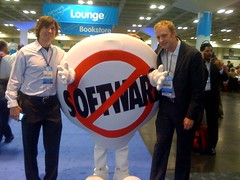 Once again, if you’d like to connect up in Dreamforce pls Direct Message me via Twitter @questionpro and we can meet up.