Inside the Fuzzy Definitions of Influence

Measuring influence has been a trend for the last few years.  Back in 2010, Fast Company ran an Influence Project (experiment) where they attempted to find the most influential person on the internet by having people “register” and share their influence link with their communities.  It was a risky move and got extreme responses from both ends of the spectrum.  On the one hand it gave visibility to folks you don’t normally think of as influencers — I, for example, ranked 21 out of over 30,000.  And on the other hand, it had its detractors who pointed out that it didn’t make sense for people who were OBVIOUSLY influential such as the Dalai Lama ranking below some of the winners.

Then came Klout, who has been a credible source of influence rankings:

Klout measures influence based on your ability to drive action on social networks, and has begun to incorporate real-world influence. Klout makes the Web better by providing a standard measurement for content creators to help drive more engaging and relevant content for everyone.

The Klout Score is a number from 1-100 that represents the aggregation of multiple pieces of data about your social network activity. We compute the Klout Score by applying our score model to these signals.

And even Klout has gone through a series of evolutions in how they measure influence to correct obvious inaccuracies as Justin Bieber being more influential than Barak Obama.  The scores have been adjusted up and down over the years in the attempt to get to what makes one person more influential than another.

What’s this got to do with surveys and how can I fix it?

What these influence examples have to show us is that some answers are more important than others.  And this is what brings us to a relatively unknown and seldom used feature of QuestionPro — weighted scales.

At its simplest form, weighting/balancing allows you to adjust the data to account for sample bias. Sample bias occurs when your survey data (from your sample) does not accurately represent your target audience.

Lets say for example, you are in the business of selling mens clothing. You also know that males form 80% of your customer base and purchasing decision. If you field a survey, and your survey response has 50% male and 50% female – you have sample bias. The data is leaning towards females, who constitute 50% of the survey data, but only constitute 20% of your customer base. 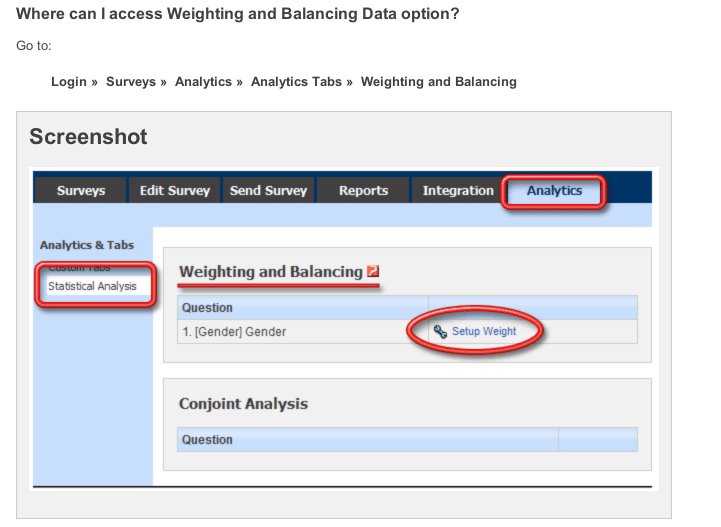 The next time you find yourself working with data that doesn’t accurately represent your population, the weighted scale feature will help you collect better data and make better decisions.