People around the world are celebrating International Women’s Day (IWD) today, March 8th. Women will be participating in marches, rallies, conferences, and discussions to honor the achievements women have made, and to discuss the steps that can be taken to continue the fight for gender equality. We took a deep dive to understand the significance of this historic date and also conducted a short survey with more than 600 respondents (men and women) from our consumer panel to gauge how Americans feel about IWD. Results are published below.

HISTORY The first “National Women’s Day” was held February 29, 1909 in New York, in honor of a strike 15,000 women held the previous year to protest for better pay, shorter hours, and the right to vote. In 1910, during an international conference dedicated to working women, Clara Zetkin proposed an annual Women’s Day be held on the same day in other countries across the world. The following year, the first International Women’s Day was observed by over one million women and men who attended rallies to protest for women’s right to vocational training and to end job discrimination.

THEME A theme is given to IWD each year, so there is a focus on a particular aspect of feminism and women’s rights. This year, the theme is #PressForProgress. This comes in response to the Global Gender Gap Report, which measures gender parity. Gender parity is a statistical measure that compares a particular indicator among women (like average income), to the same indicator amount men. The report found that we are still 200 years away from gender parity in four main areas: economic participation and opportunity, educational attainment, health and survival, and political empowerment.

SUPPORT 34 companies, including Morgan Stanley, Proctor & Gamble, and Ernst & Young, illuminated buildings with giant red female symbols (♀) as part of the Catalyst Skyline Takeover campaign to show a dedication to advancing women in the corporate workplace. Catalyst is a non-profit that works with companies to make their workplaces more inclusive. According to their research, even though women make up 47% of workforces in the U.S. and Canada, men still lead more than 95% of the most powerful companies in the world.

RESEARCH RESULTS In recent months, movements focused on women’s empowerment like #MeToo and #TimesUp have elevated the global conversation about obstacles women face in both their personal and professional lives. We polled over 600 Americans across the country to learn their thoughts on International Women’s Day. We found that an impressive 75% of the respondents were aware that March 8th is IWD, and only 7% had never heard of it. When asked to “use one word that comes to mind when you think of IWD”, the majority of those surveyed answered  “empowerment”, followed by “equality” and “strength”. 33% of those polled feel gender equality in education has most improved over the last decade, followed by social issues (24%), equal pay (21%), workplace environment (20%) and 2% feel there have been no improvements. Looking forward to the future, the vast majority of our respondents hope equal pay will improve over the next decade. 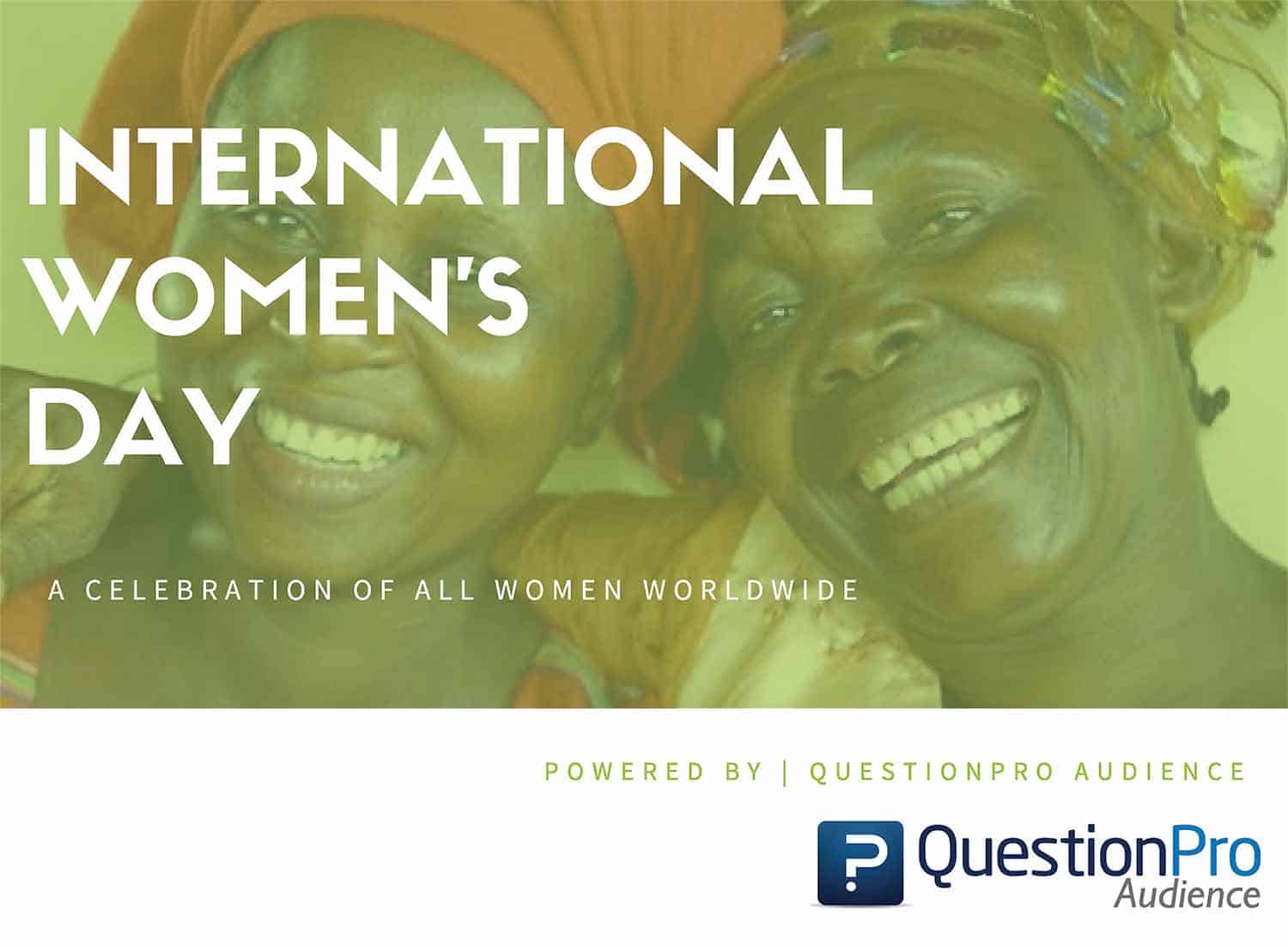 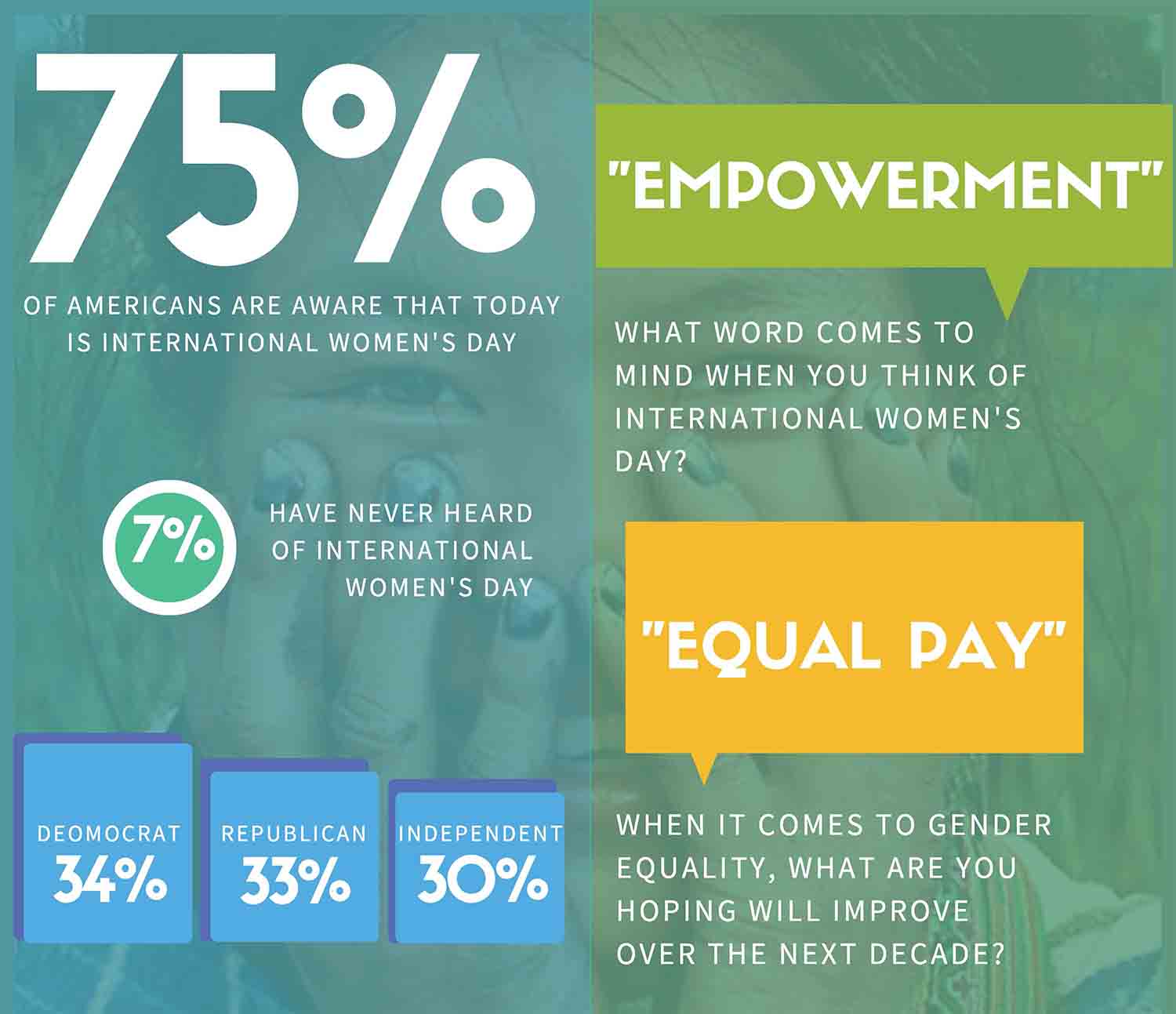 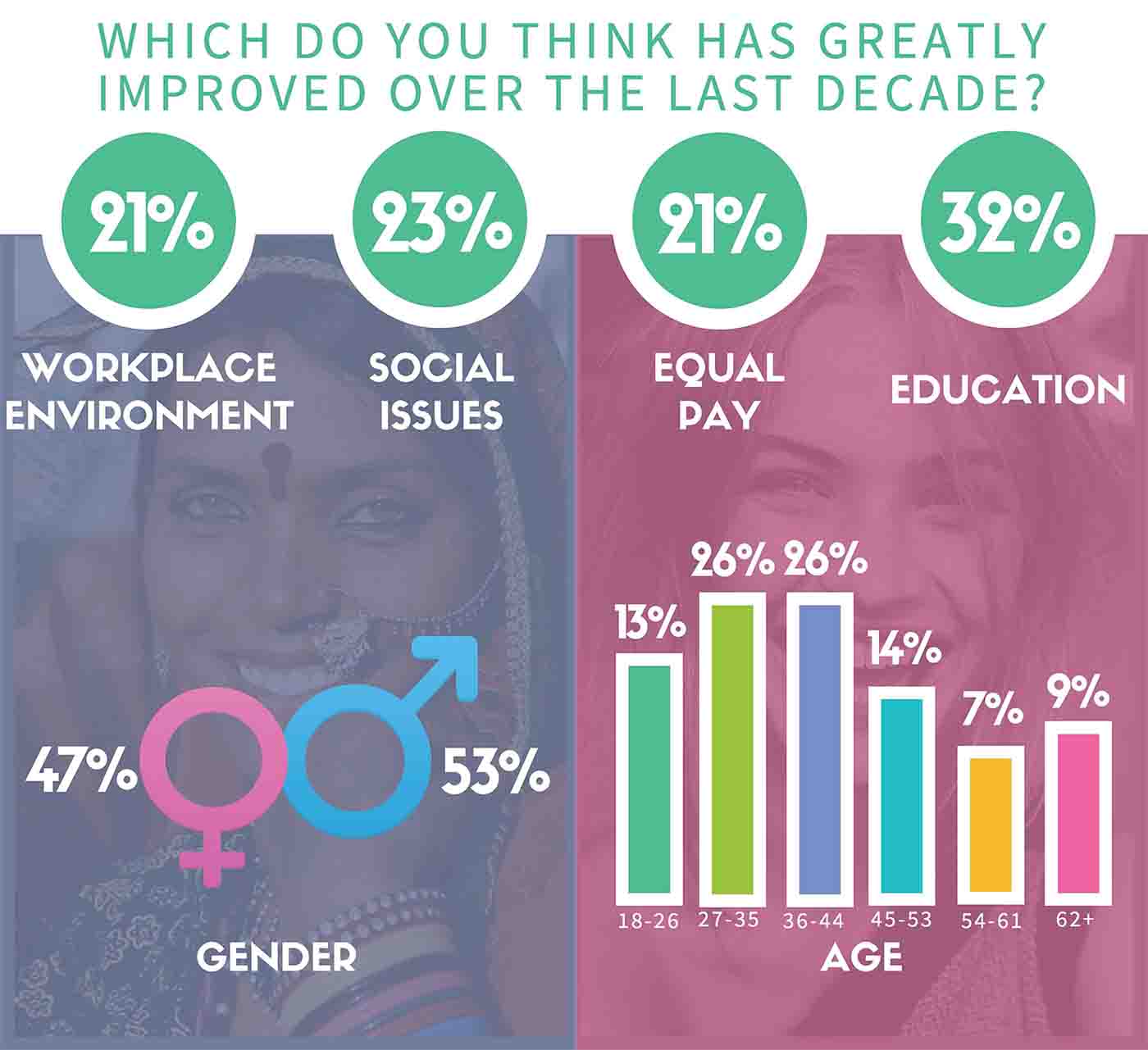 QuestionPro Audience provides our clients with access to more than 22 million active respondents, who are strategically recruited to participate in quantitative research and live discussions. By implementing various recruitment methodologies, we make sure to provide the right kinds of respondents for your research. With industry knowledge and innovative tools, QuestionPro Audience always meets the rigorous demands of our clients. Contact us for your next research project.