Is it Time to Give the NFL Officials What They Want? 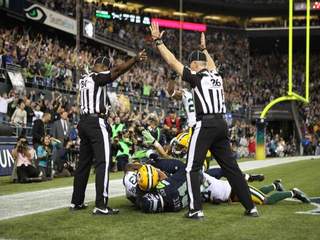 If you haven’t heard about the controversy surrounding Monday night’s football game (Green Bay Packers vs. Seattle Seahawks), then there’s a chance you’ve been living in a cave. Not only has it dominated every sports news publication and my evening news channel, but even President Obama is talking about it. In case you have indeed been living in a cave, get the recap of the game (and the controversial call) here.

Packer’s guard T.J. Lang was clearly unhappy about the outcome of the game, with his post-game tweet already becoming the third most retweeted tweet of all time (after only ten hours).

Obviously with so much negative attention the refs have already faced, this may be the straw that breaks the camel’s back. Now, we all know NFL commissioner Roger Goodell isn’t the one who is actually locking out the refs, but fans, players, and coaches are demanding he steps up to help end the lockout.

What do you think?  Take our Poll!