Multicultural Marketing is More Than Translation 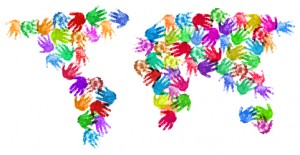 When Thomas Friedman, author of The World is Flat wrote his book.  It was a whack on the side of the head moment.  In the past, we used words like international to describe anything that was outside our own country – but was still separate.  Then we migrated into worlds like global, which had this connotation that an organization was unified – even though they had operations all over the world.

What Friedman showed us was that neither of these was an accurate representation of the world we live in.  We are an extremely mobile population where people will often move from one country to another just for the experience.

This means that as marketers, we are selling to a multicultural population.  Some countries are more multicultural than others, but with so much marketing happening online, you might as well assume that you’re talking to everyone in the world.

A Primer on How Multicultural We Are

While cruising my blog feeds, I ran across this outstanding article by Jeff Henning at Vovici blog.  In it he outlines a presentation by David Morse, author of Multicultural Intelligence.  I’ve paraphrased from the article here.

In his book, Multicultural Intelligence, David Morse talks about the eight rules that you should follow when you’re marketing to a multicultural population.   I’m giving you a short summary here:

How Can You Start Thinking Multi-culturally

Chances are you’ve already started thinking multi culturally.  And Google Translate makes that even easier by translating web sites and blogs instantly into any language you’d like to see.  But there is more to it than that.

David Morse recommends researching your audience fully and not defaulting to old truths or stereotypes.  This means that it’s a good idea to run a thorough profile update of your customers and your overall audience.

You can do this by creating a series of Micro-Polls or recruit a panel of customers, readers or general market population to participate in an ongoing survey.  Be sure to have rewards ready for them.  These might include free product or sharing the results, gift cards, etc.

McDonald’s does 40% of its U.S. business with ethnic minorities, and half that group is younger than 13. In response, McDonald’s runs focus groups with disproportionate numbers of minority participants. The company has also introduced performance standards for its advertising agencies, requiring them to measure how well their work addresses ethnic “insights.”

A small business wanting to get more international clients might progressively test small changes in writing more specifically for a wide multicultural readership.

Don’t assume that you’re multi culturally aware just because you do business with people all over the world.  It’s time to start segmenting and understanding the subtle differences in our audiences so that our targeted marketing can do its job.