Our Auto Rickshaw Adventure – The world is indeed flat! 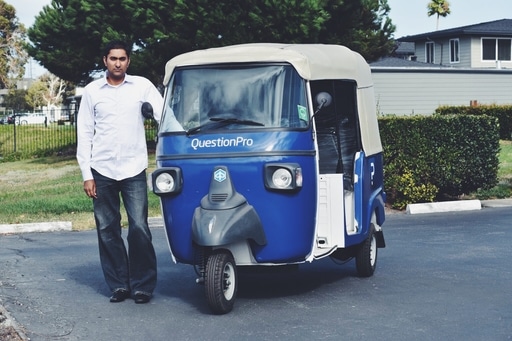 The world’s fascination with India’s auto rickshaws has been growing over the years. It reached its peak when “Brangelina” – The media-given name to the world-renowned Hollywood actors Brad Pitt and Angelina Jolie, went on their very own auto rickshaw adventure across the streets of Mumbai with one of their kids back in 2006.

The trend has taken off when major celebrities such as Adrien Brody, Owen Wilson, and Jenson Button went on their own rides in this eye-popping vehicle that Indians often take for granted and sometimes even look down upon.

Auto Rickshaws’ as they are called in India or Tuk-Tuk in South-East Asia – have been a passion of mine every since we all were kids growing up. A few years ago we here at QuestionPro decided that we will import an Auto Rickshaw from India and figure out a way to make it street legal in the streets of San Francisco and have a ton of fun doing this. I have never stopped appreciating these compact but marvelous pieces of art.

In the age of Tesla’s and Google Self Driving cars, we want to ride around in our Auto Rickshaw to bring attention to interesting and diverse ideas around the world – right here in our melting pot that is the San Francisco Bay Area.

As I was parking near a Ducati dealership (I needed to buy a helmet) – one of the employees came out and took a photo – and mentioned “You know what I like about you guys coming from India….I love the fact that you guys also bring in the cool shit for us!” — That made my day! I love the fact that we can also cross-pollinate even a Ducati dealership employee with some Indian love!

Get an Auto Rickshaw Ride at Dreamforce in San Francisco

Please use the #SFRickshaw and tweet to @questionpro – and I’ll respond and give you a free ride if you are in the Mosconi Center area! (Or maybe we can just grab a blue bottle coffee!)