How We Increased NPS Response Rate 3x within 36 Hours

I proactively work with many digital communication teams today who work endlessly to improve communications with their customers, with email in particular. The average number of business-related emails sent and received is on average 121 each day and is expected to soar to at least 140 in 2018. The challenge with this is competing with the other 120 emails and increasing your response rate.

It is fair to argue that well-designed communication channels, particularly emails, receive higher response rates. But when we ignore the user perception of these emails, we may be missing out on the bigger picture. While they do look aesthetically pleasing and well-branded, many fail to test branding and design against the metrics that matter.

I have always been a believer in plain text emails because they look more personal and are easier to digest. I recently worked with a division of Vistaprint and we almost tripled their response rate from 6% to 14% in just 36 hours. I worked with the Vistaprint division to solve one of their biggest challenges — to increase their customer response rate so they could better understand their customer’s journey. I worked with Vistaprint to design a branded survey invitation to ask the NPS question, “How likely are you to recommend us to a friend or colleague?” 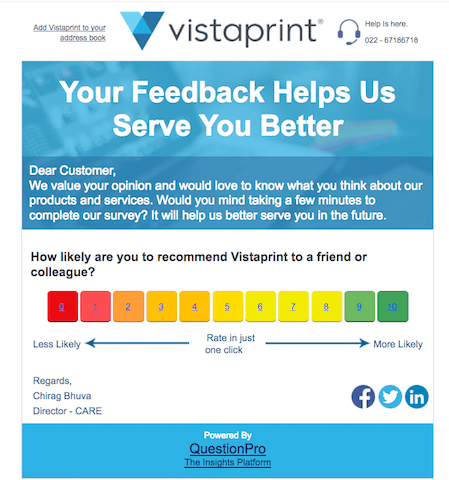 Email Variation A with CSS

As you can see, this email, version A, is not short of CSS and design elements. We launched the survey to all Vistaprint customers who have made a purchase within a recent time frame so we could monitor and understand their overall experience with the company.

As a result, we got a response rate of 6.5% which is on par with industry standards.

After sending out survey invitations for over 10,000 transactions, we received 656 responses. This was a huge improvement to the responses prior to when I had started working with the Vistaprint division, but I wasn’t convinced that this was the best we could do. In most cases, the customers (or recipients) were using a Gmail account. Then it hit me – emails with heavy CSS and HTML may be presumed and categorized as a “Promotion” rather than a general email that goes straight into your Primary inbox. Well, that was my hypothesis anyway.

Let’s take Google as an example since 80% of the emails that we worked with were sent via Gmail. If you noticed, Gmail has a tabular interface in the email and mobile email applications. There are three tabs that aggregate and bucket your emails into categories: Primary, Social, and Promotion.

I tested my hypothesis: When heavy CSS and branding is present in an email, the email is more likely to be classified as a Promotion. Email open and response rates would respectively be lower than a Primary email as it requires more clicks for a user to reach. Additionally, emails considered as “Promotion” are less likely to be opened as they are considered a form of marketing or advertisement.

Mailchimp launched an experiment where they measured the open rates before and after Gmail implemented the new inboxes. Before the tabbed layout, open response rates to Gmail had been above 13% for 15 weeks. Open rates never dipped below that threshold unless there was a specific holiday. The graph below illustrates two scenarios: the right is the open rate results after Gmail implemented the new inboxes while the left compares the data points relative to the right chart results.

Email Variation B with plain text

To test my hypothesis, I created an email version B in plain text. The goal was fairly simple and straightforward: keep the email message short, personal and simple. I sent another batch of emails to new respondents and within 36 hours, we collected over 400 responses, increasing the total number of responses to 1,365. This was astonishing: a bump in the NPS response rate from 6% to 14% in just 36 hours.

How to increase NPS response rate?

You must first focus on your metrics. The metric we looked at here was the survey completion rate. In order to drive that metric, we had to look at ways that affect that metric. For example, open rate is a metric directly linked to the core survey completion rate. We decided to begin focusing on the factors that affect the open rate which led us to form the hypothesis about Gmail’s inboxes, personalization, and messaging.

To increase open rates, we needed to have the emails sent to the Primary inbox. I tested versions A and B of the email and found that plain-text emails are highly likely to be delivered to the Primary inbox, whereas CSS-heavy emails get sent to the Promotions inbox. Once I had the customer’s attention, I shortened the message to be more personable and direct so that I could focus on a single call-to-action.

There has never been a time in the digital space where everyone is fighting for a customer’s attention. People are overstimulated by emails and advertisements on a daily and studies have shown that customers are more likely to respond to a personal, more humanlike email than your average automated email from your marketing software. Tweaking your business emails to plain text with a short and personal message will most likely first bypass the Promotion tab in Gmail. From the results I achieved, I would recommend to always test these two variations if your goal is to increase response rates. Of course, there are other ways to continue to optimize and test the emails, such as subject line, but this is a great place to start. The most important takeaway is to always optimize your emails to accomplish your main metric.