I was in a meeting the other day when the conversation turned to trademarked phrases.  It didn’t take long before three of us pulled out our smartphones and tablets and started searching and clicking on the patent and trademark offices web site to check if a phrase had already been registered.

Here’s what I got on my iPhone — this is the ACTUAL SIZE of the image! 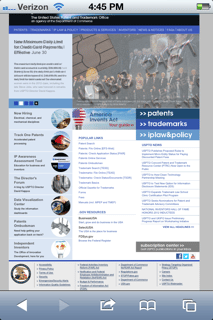 The iPad users had the best results — mostly because the screens are so much bigger than those of the smartphone.  In other words, it wasn’t easy to get to the information we wanted, when we wanted it and using the devices we had become accustomed to.  This is because most government web sites really aren’t mobile-friendly.

Maybe President Obama has had the same problem.  Can you just imagine being in all these government meetings and having to navigate all those complicated sites on your smartphone?

I don’t think Obama could either.  So he made a change.

As smartphone use in the United States tripled in 2011, more and more businesses are realizing if they want consumers to access their websites, they must optimize their sites for mobile devices. This realization prompted President Barak Obama last month to order all major government agencies to make key services available on mobile phones within one year.

Obama, a self-proclaimed smartphone user, made this requirement to respond to the growing trend toward web surfing on mobile devices. In addition, he also ordered federal agencies to create websites that will show their progress toward mobile conversion efforts. These reporting websites must be publically available within 90 days

Obama noted that many private industry companies have already transitioned their web presence to optimize for mobile. For example, at QuestionPro, all of the online and offline surveys are automatically optimized for mobile respondents and will detect the device being used without your doing anything.

The success of your survey data — and ultimately your decision depends on how easy your survey is to take and who answers your survey.  QuestionPro’s has several mobile-optimized feature options —

The first is the one I just described above — no action required.  If you’d like to take an offline survey— check out the SurveyPocket mobile survey application.  You can install it on any smartphone and collect survey data from anywhere — with or without an internet connection.

So what are you waiting for — go out there start conducting offline surveys, start asking questions, getting answers and making great decisions.