What do you mean by SPSS?

SPSS stands for Statistical Packages for the Social Sciences. It is an analytic software tool being used by marketers and researchers to analyze complex survey data and mine text data.

Although QuestionPro has one of the best and most robust in-built analytics and reporting features, researchers prefer SPSS for granular statistical analysis. QuestionPro offers the ease and flexibility to export the raw survey data to SPSS.

Our users love us due to the simplicity and ease we provide in exporting raw survey data into different formats. For advanced research, many researchers rely on exporting data to SPSS. QuestionPro has been offering SPSS survey data export as an option under data export. After you decide to export the data in SPSS format, the QuestionPro automatically generates ‘.SAV’ file and is saved on your device. You can open the file using SPSS or PASW tool.

Survey variables and values in SPSS

SPSS variable names are data points that can be adjusted based on the needs of the SPSS analysis. The variable labels will show up in the report. Every time a researcher or marketer opens a data file in SPSS format to examine the data, variables (in columns) and values (in cells) will be visible.

Example: A well-known research institute surveyed to understand the culture in specific demographics. They wanted to understand the problems faced by people in their day-to-day life.  The survey had a question asking people about their ethnicity. ‘Please specify your ethnic origin’

Most of the survey tools will generate the corresponding variable name,

However, to make the reporting simple in SPSS researchers needed to adjust the variable name so that the responses would look something like

The major problem marketers and researchers would face are manually clicking on the data view and changing the variable name or updating the question codes. Furthermore. Researchers tend to export data frequently and sometimes add a question between two questions. In such a scenario, the variable name generated in the SPSS does not match the question code provided in the survey. Else, update the data file to their liking.

To address the problem, from now on the survey variable names will be auto-generated by QuestionPro.

What did we change?

How to customize SPSS variable name in QuestionPro 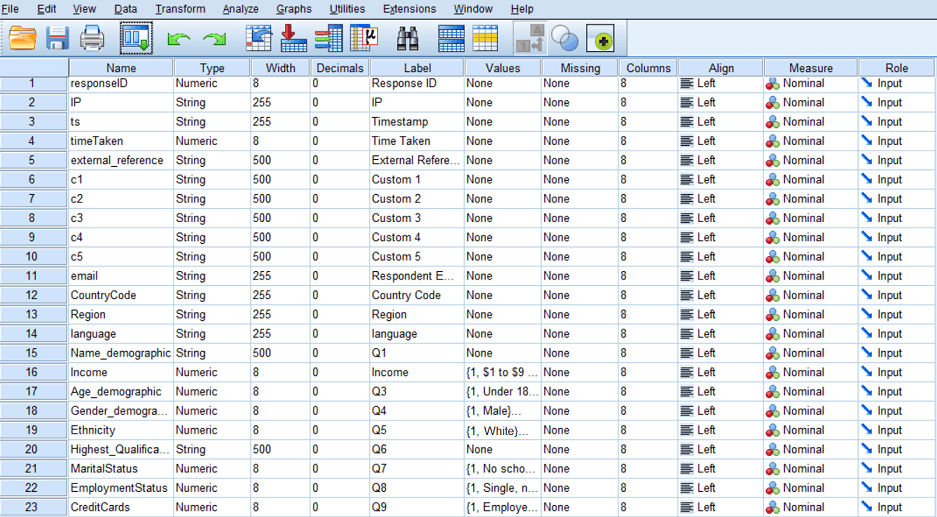 If you have any issues or concerns regarding the SPSS variable name update, you can contact our customer support team anytime at your convenience.