Build a Positive Culture by Living Your Values (Literally)

It’s one thing to say you have a vision, it’s another thing to get there. It’s one thing to have some values, and another to demonstrate that they are indeed valued. And it’s one thing to know who you want to be, and another entirely to understand who you really are today. When it comes to culture and employee experience (EX), we all too often focus on the end and pay very little attention to the means. We run to the shiny object before taking the time to acknowledge our starting point. If organizations measure, assess, analyze, and understand what they’re really working with – the good, the bad, the ugly – they’re in a much better position to get to where they want to go.

Culture helps us identify what’s going to drive our success and what’s getting in the way of it.

When Nancy MacRae took over as the Chief Executive Officer of the Emergency Nurses Association (ENA) back in 2016, she inherited an organization that was solid, liked to play it safe, but wasn’t “spectacular.” They had just been through 5 years of leadership transition. The organization had a reputation as a contributor to the professional field of emergency nursing, but they weren’t recognized as a leader for the profession. Their membership ranks were growing but at a declining rate. Their product offerings were living out their useful lives.

Nancy, the Board of Directors, and her trusted colleagues knew it was time for a change. They knew it was time to focus on the future, to build stronger partnerships, and to craft a vision that would drive them to thrive, not just survive. They wanted to become a leading educator for emergency nursing, they wanted to become an advocate for rewarding careers in the profession, and they wanted to grow a community that could readily respond to the evolving needs of their members. This was a tall order. And they were insightful enough to recognize it wouldn’t all just happen. They were ready to be thoughtful, thorough, methodical, and intentional about it.

Nancy and I met at an event in Chicago not long after she started this journey. I learned more about what they were up against and quickly realized ENA was in a perfect place to do their first WorkXO® culture assessment. Nancy agreed. She realized that getting some rich empirical data would allow her and the team to prepare for a more successful transformation. She wanted the organization to dispense with assumptions and begin this journey with knowledge and awareness. She wanted to know what her employees were really experiencing – the behaviors, actions, words, values, and beliefs that were showing up (and the ones which were not). She wanted to know where they had the biggest gaps in the organizational behaviors that were essential to their future.

To make a long story short (we’re now in our second year of working with the ENA organization), QuestionPro helped them conduct an annual culture survey and analysis (twice), we helped them identify those workplace behaviors which were driving success and those which were inhibiting it, and we helped them identify their priorities. As a result, they were committed to collaborating more closely across the organization and with their partners, they became focused on innovation and finding new ways to deliver value, they took a huge step toward upgrading their technologies and resources, and they went “all-in” on transparency while busting silos and tearing down walls (figuratively and literally). We helped them build an internal “Culture Council” that has since then acted as the steward to this work. We helped them craft the plans for dispensing with the old and bringing in the new.

A lot of work has happened over the last two years. And the results have been transformative – remarkable, really. They have experienced record highs in membership (44,000 and counting), in attendance at their professional development events (including their annual meeting), in foundation contributions, and in revenue. They’ve also seen record lows in employee and member turnover. Member satisfaction is 83% – against a professional and trade association benchmark of 72%.

All of this is paralleled by the transformation in their culture. Desired behaviors in their workplace are showing up 16% more. Their employee net promoter score (eNPS) went from -1 (yes, negative 1) to 27 (15% more promoters and 13% fewer detractors). That is a dramatic 12-month turnaround. Not unheard of, but dramatic nonetheless; and it all translates into heightened employee engagement, loyalty, and productivity.

We have lots of stories like this – stories that demonstrate what better data, awareness, and intention can bring to culture and employee experience. Organizations – and leaders like Nancy – who are willing to stop paying these things lip service and start getting serious about them, are receiving big dividends.

Our congratulations to the entire team at ENA!

With QuestionPro Workforce, you can measure and track your work culture, employee initiatives, and levels of workforce engagement, staff productivity. This helps in identifying gaps and bridging them to improve your people processes. 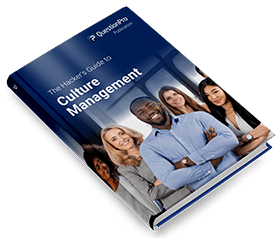