What are Ethnicity Survey Questions?

Ethnicity survey questions are a questionnaire that provides information on the background of a respondent, which is based on common ancestry, language, history, society, culture or nation. It is an inherited status based on the society in which one lives. Such information allows the researcher to cross-tabulate and compares the categories to see the variation in responses as well as understand if ethnicity plays a role in the choice of the respondents.

Adding in ethnicity survey questions can enable a researcher to determine promotions or pricing and sort response groups, based on their needs and interests. Various ethnicities have different interests and varied disposable incomes, compared to other ethnic groups. Furthermore, with most businesses running online, it is even more important to know your audience to analyze the responses accurately for strategic decisions.

For example, when conducting a survey to understand public opinion about various media sources, respondents raised in a rural Native American culture may respond to such questions differently from someone raised in the urban culture. Hence, it is important to include an ethnicity survey question in a survey such as a media accountability survey to conduct effective research, which includes representatives from all target ethnic groups.

Types of questionnaires where an ethnicity survey question plays a vital role!

Asking demographic survey questions such as ethnicity and race questions can provide researchers from various industries across the public and private sectors with relevant information about any target audience. It can also help you segment the audience, based on ethnicity, race or culture biases and many more, thus helping you to deduce a pattern on how a respondent chooses an option because of their ethnicity or race. A few questionnaires where such a question should be included are as follows:

Difference between Ethnicity and Race

There aren’t many people who can accurately describe the difference between ethnicity and race, as we usually tend to put them together in the same group. They are similar in nature, however, there are differences. For instance, a Caucasian can be called white, however, that does not describe his ethnicity. He can be a caucasian from the US, Canada or Ireland. Ethnicity is about tradition, customs, and their origin.

It is about learnings, of where you come from and celebrating the traditions and ideas from a particular region. Ethnicity also gives you an option to choose, because you can change your ethnicity from your own to another. You can move from one region to another, learn their traditions, customs and assimilate their beliefs. The same is not possible with race.

Race is referred to your genetic makeup and biological features. It can be skin color, skin tone eyes, eye color, hair color, etc. It is something that you are born with and cannot be changed. 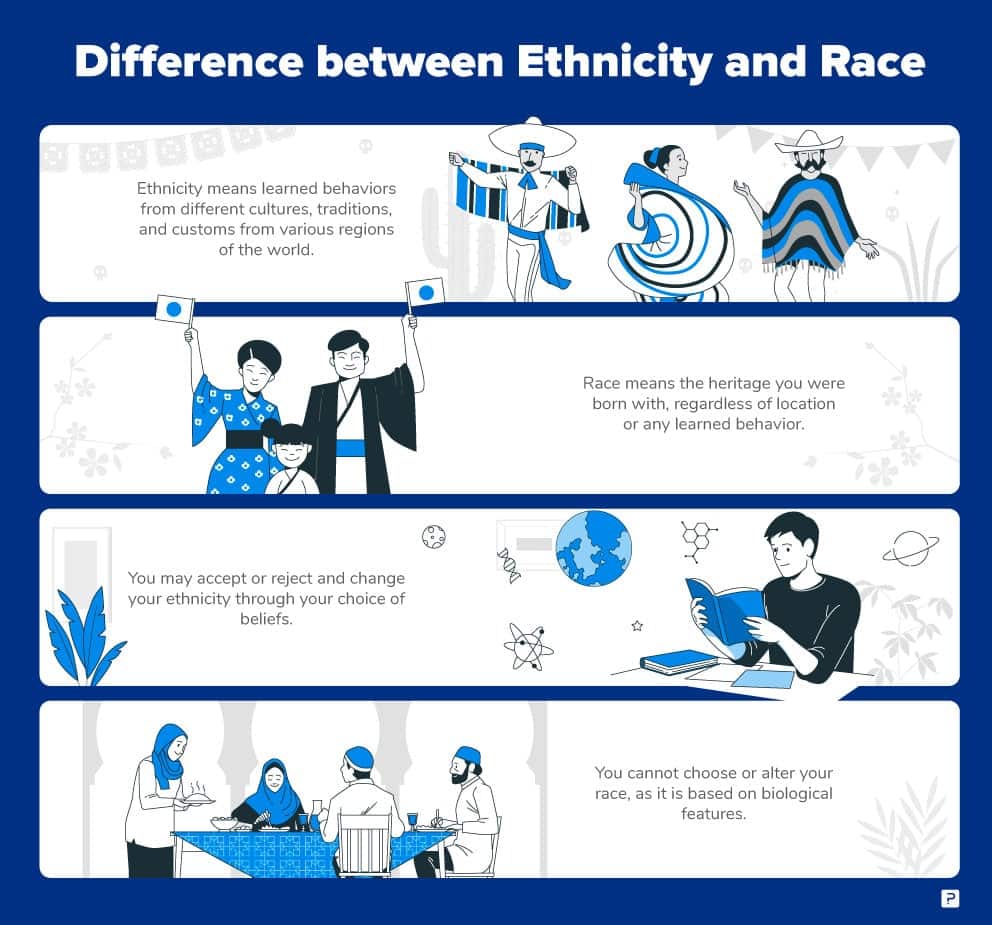 When asking these question, a researcher can use checkbox questions as respondents can identify themselves as a member of multiple races. The above question can enable a researcher to generalize the respondent in a large group of an ethnic or racial group. However, if the researcher wants in-depth information, the following approach can be asked.

Such a question was used in the 2010 US census form about race and ethnicity. Such a question can give the researcher accurate in-depth information about the respondent. Furthermore, adding open-ended responses will give the respondent, the freedom to write a specific race or ethnicity they identify themselves as. Such questions can help increase the response rate of the survey as well.

Such a question is usually preferred nowadays by most survey designers, as ethnicity and race are sensitive topics and many people still find it quite intrusive when asked. Giving the option to skip the question, enables the respondent to feel, that the question is not being forced onto him. Furthermore, an option with an open-ended response also gives the feeling of being all-inclusive and hence leaves out the chance of offending any respondent. Depending on what the data is needed for, any approach can be taken to ask the question.

The Future for Ethnicity and Race survey questions

Since race and ethnicity are sensitive topics, and often emphasize discrimination, government institutions are trying new innovative methods to completely eliminate the use of the word race or ethnicity when asking survey questions. In the future years, questionnaires would just ask the respondent to check categories that describe them. An example of such a question can be as follows:

Using such an approach is favored by most people as it avoids the problem of people getting hung up on the terminology. Such a question using category will also allow the respondent to answer it quicker as compared to the other question approaches. Hence using such a question will allow respondents to freely check more than one box if they wish and will lead to a low non-response rate on these questions.

Furthermore, a researcher has to keep a few things in mind when including ethnicity survey questions. It has to be made sure that the information that is being asked is the information that you would need. Express interest in the human characteristics of the respondent and ask them to express aspects of themselves that are relevant to your research topic.

A researcher has to understand that asking such a question is asking for sensitive or private details about the respondent and is a significant ask, hence a researcher should always justify the need for such information and offer rewards to the respondents.