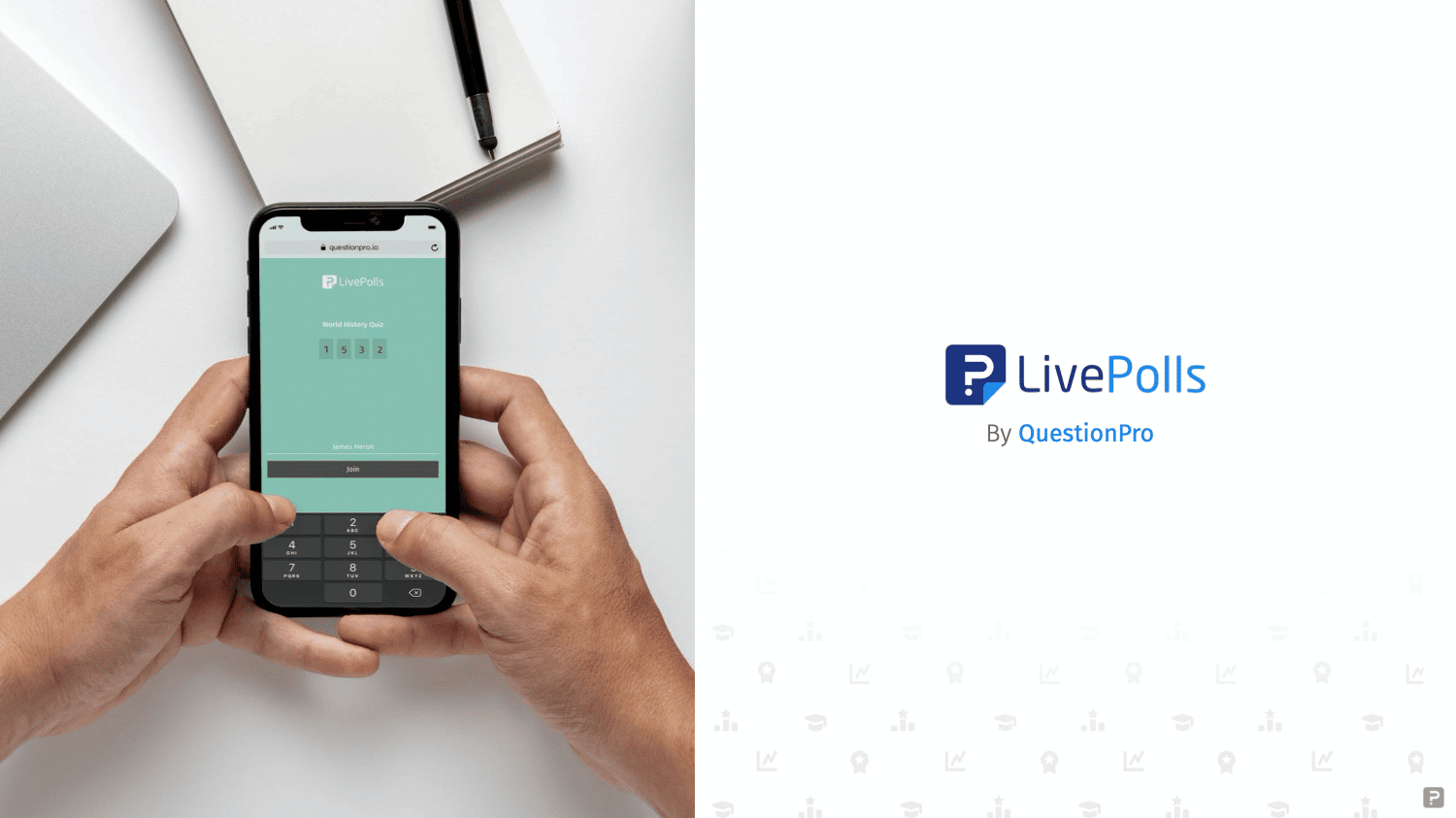 What do you do if you want to conduct a quick online quiz and show the results to participants in real-time? What if you’re going to conduct a poll with all the people in the same room? Let’s talk about live polling.

Well, we saw a challenge here in gathering answers from the people and showing them the results – all in real-time. That’s why we developed LivePolls to generate insights in real-time.

We hope you were able to join our LivePolls sneak peek webinar, but if not, we are here for you! Below is a candid overview and some of the questions we came across from our attendees in this exclusive sneak peek.

What problem are we trying to solve?

So the main problem that we are trying to solve is what we call ‘real-time polling’ for in classrooms and in-person events. So the idea here is to say, obviously, if you think about what we do for our core business, which is surveys we collect data, but it’s done asynchronously. What it means is we send out surveys, and people can take the surveys, when they want. While you get the data in real-time as they take the survey, you can’t control when they take it, and you are not in the same location.

Taking a step back

We wanted to kind of step back and said okay, when I, how do we solve the problem of, you know, 40 people in a room just like this right now. So we have about 40 or 50 people in a virtual room or a physical room doesn’t really matter. And we want to get a pulse on you. I want to ask you a few questions to understand how everybody’s thinking. How would we do that at scale with some structure, in a reasonable, easy and simple way.

The other element that we really wanted to counteract was active engagement. We want to make this polling kind of experience that is highly engaging and make sure that people are kind of almost addicted to it.

Because when we are presenting. We want people to be engaged with us. And that’s kind of that’s natural either it’s in a classroom setting, or it’s in a webinar or even in a conference.

All these three kinds of scenarios is what we are really primarily targeting effectively.

There are two different kinds of models that we are kind of thinking about, and the third model is the trivia model.

2) The second part that we’re thinking about is quizzes as a use case. So you know the difference. The big difference for and the quizzes, you know, of course, has a correct answer. Paul is just an opinion.

3) The third component that we are kind of toying around with what we are calling trivia. It’s almost exactly like a quiz, except that in the trivia model, if you answer the question incorrectly, you’re out of the game. It’s kind of a sudden death kind of scenario.

We’ve already implemented today; we will know I’m actually going to walk you guys through and actually live implementation. So we’ll just do the whole thing live with all 40 of us are you get a feel for how it works, actually.

Host and participants in sync

You can interact with your participants in 3 simple steps.

Instead of trying to get people to go to complicated URLs with backslashes, numbers, etc. we created a simple URL, and they type in a four-digit PIN code to get in there. From an operational perspective, it’s super easy to tell people, “Hey, go here and enter 5532, so that’s a simple way of getting in getting in there.”

The second component is like hey look, you know, when you’re in the room, you know, you know, keep them engaged, give some trivia questions and answers.

And then you go through, you know, go through the bowl, and you know, answer the questions. The whole thing is real-time as people are answering the questions the presenter can show the results.

The goal of this tool is really to make sure that the focus is on the presenter, or the focus on the either in an academic setting it with a professor in a conference setting will be the presenter fuel.

But if the question shows up on the main screen, only the answers show up on the device, then you have to be engaged. That’s a very conscious decision we made, and it’s a little controversial. We think that this forces the respondents to actually pay attention to what’s going on on the screen, rather than futz around with their phones factor.

Is the time-scoring part optional? – Lars

Yes, you can set it to infinite, which effectively means there is no time limit. You can manually control it.

Is a multiple-choice the only type of question available? – Francisco

Yes, at this point in time, we want to keep it super simple, easy-to-use, and effective. We’re working on open-ended comment boxes so that users can post comments, view others’ comments, and vote on them. Say in this kind of setup, if I ask what new feature you would like me to add, you share your ideas as comments, and then we work on the top two elements with the highest votes.

Can the pollster be anonymous? – Laura

That will be an exciting setting depending on the use case. We don’t reveal that, say, Heather answered this, so it’s anonymous in that sense, but you’ll be able to figure out who answered what based on the number of points. At no end in screens do we display the person’s name and the response next to it.

Can you add pictures or graphics as part of the quizzes? – Jason

No, but that’s a logical ask, but maybe in a couple of months as the product matures.

Can you create polls in real-time? – Sara

Theoretically, as an admin, you could go and create a poll. That’s how we could do it in real-time. In the majority of use cases poll is generally created 15 minutes ahead of the session, you don’t need to plan it many hours before as it’s super simple to create a poll. Keynote speakers can use it as the day progress. So, if the people want to ask some questions, they can add that in.

What’s the maximum number of people you can use polls with? – Jason

We’ve done it for three or four people, but we’re in talks with some of the radio stations. They find it pretty interesting, and it’s going to be in thousands, so it’s reasonably large.

Could you hide the leaderboard? – Anonymous

Yes, I think we could probably hide the leaderboard, so it’s not kind of in this model where for every question, you get to see the results. If you are in a private more than leaderboards are not shown. You can see aggregate data, but not the leaderboard. If you don’t see the leaderboard, it’s nearly impossible for you to figure out who’s answered what.

Is there a way to export the results? – Joseph

No, it’s in super-beta mode, but it’s a great ask. Our survey product has a bunch of export options, but we don’t have it on the roadmap right now.

Can I use a QR code to join the polls instead of having a type of web address? – Joseph

Yes. The next version of what we’re going to launch is a URL generated for this poll. So you can type in like the four-digit PIN code, or it will be a questionpro.io slash the four-digit PIN code. Once we have a URL, the corresponding QR code is generated for that URL. A QR code is nothing but a link or reference to a URL for practical purposes. So that’s something that is on the roadmap.

Will there by integration with Blackboard or Canvas – Francisco

As you can see, this is not integrated with any other subsystem. It’s reasonably lightweight and easy to use. Integration with other apps will make it much easier. We’re planning on doing that anyway. That’s the first LMS platform that we want to kind of integrate with. Our product team has already started working on it.

Is there any bank of questions available for free? – Anonymous

Not really, at this point, our assumption is, you come up with a question. Although we are thinking about adding a bunch of trivia questions. So maybe you can pick and choose if you’re going to run.

It’s free! We have a couple of tools for free. Our core essentials license is free, and we give website embedded polls for free too. We see this as an engagement tool for our customers and want to stick to our game plan.

This was just a sneak peek of the beta, so stay tuned for a broader launch.