Correlational Research: What it is with Examples

Our minds can do some brilliant things. For example, it can memorize the jingle of a pizza truck. The louder the jingle, the closer the pizza truck is to us. Who taught us that? Nobody! We relied on our understanding and came to a conclusion. We don’t stop there, do we? If there are multiple pizza trucks in the area and each one has a different jingle, we would memorize it all and relate the jingle to its pizza truck.

This is what correlational research precisely is, establishing a relationship between two variables, “jingle” and “distance of the truck” in this particular example. The correlational study looks for variables that seem to interact with each other. When you see one variable changing, you have a fair idea of how the other variable will change.

What is Correlational research?

Correlational research is a type of non-experimental research method in which a researcher measures two variables and understands and assesses the statistical relationship between them with no influence from any extraneous variable.

Let us take an example to understand correlational research.

Consider hypothetically; a researcher is studying a correlation between cancer and marriage. In this study, there are two variables: disease and marriage. Let us say marriage has a negative association with cancer. This means that married people are less likely to develop cancer.

However, this doesn’t necessarily mean that marriage directly avoids cancer. In correlational research, it is not possible to establish the fact, what causes what. It is a misconception that a correlational study involves two quantitative variables. However, the reality is two variables are measured, but neither is changed. This is true independent of whether the variables are quantitative or categorical.

Mainly three types of correlational research have been identified:

For example, being educated might negatively correlate with the crime rate when an increase in one variable leads to a decrease in another and vice versa. If a country’s education level is improved, it can lower crime rates. Please note that this doesn’t mean that lack of education leads to crimes. It only means that a lack of education and crime is believed to have a common reason – poverty.

3. No correlation: There is no correlation between the two variables in this third type. A change in one variable may not necessarily see a difference in the other variable. For example, being a millionaire and happiness are not correlated. An increase in money doesn’t lead to happiness.

Correlational research has three main characteristics. They are:

The distinctive feature of correlational research is that the researcher can’t manipulate either of the variable involved. It doesn’t matter how or where the variables are measured. A researcher could observe participants in a closed environment or a public setting. 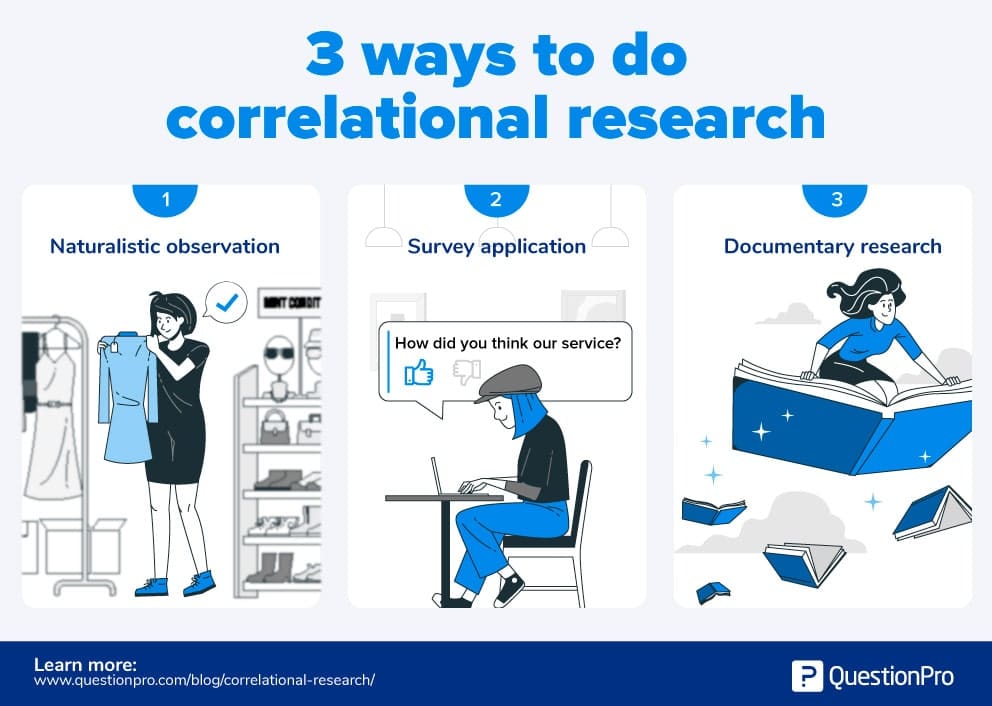 Naturalistic observation is a way of data collection in which people’s behavioral targeting is observed in their natural environment, in which they typically exist. This method is a type of field research. It could mean a researcher might be observing people in a grocery store, at the cinema, playground, or in similar places.

Researchers who are usually involved in this type of data collection make observations as unobtrusively as possible so that the participants involved in the study are not aware that they are being observed else they might deviate from being their natural self.

Ethically this method is acceptable if the participants remain anonymous, and if the study is conducted in a public setting, a place where people would not normally expect complete privacy. As mentioned previously, taking an example of the grocery store where people can be observed while collecting an item from the aisle and putting in the shopping bags. This is ethically acceptable, which is why most researchers choose public settings for recording their observations. This data collection method could be both qualitative or quantitative.

Another approach to correlational data is the use of archival data. Archival information is the data that has been previously collected by doing similar kinds of research. Archival data is usually made available through primary research.

In contrast to naturalistic observation, the information collected through archived data can be pretty straightforward. For example, counting the number of people named Richard in the various states of America based on social security records is relatively short.

Use the correlational research method to conduct a correlational study and measure the statistical relationship between two variables. Uncover the insights that matter the most. Use QuestionPro’s research platform to uncover complex insights that can propel your business to the forefront of your industry.