Probability sampling: What it is, Examples & Steps

Imagine you have a population of 100 people. In this scenario, every person would have odds of 1 in 100 for getting selected. Probability sampling gives you the best chance to create a sample representative of the population. From the responses received, management will now be able to know whether employees in that organization are happy or not about the amendment. Let’s talk about probability sampling.

What is probability sampling?

Probability sampling is a technique in which the researcher chooses samples from a larger population using a method based on probability theory. For a participant to be considered as a probability sample, he/she must be selected using a random selection.

The most critical requirement of probability sampling is that everyone in your population has a known and equal chance of getting selected.

Probability sampling uses statistical theory to randomly select a small group of people (sample) from an existing large population and then predict that all their responses will match the overall population.

What are the types of probability sampling?

Simple random sampling, as the name suggests, is an entirely random method of selecting the sample. This sampling method is as easy as assigning numbers to the individuals (sample) and then randomly choosing from those numbers through an automated process. Finally, the numbers that are chosen are the members that are included in the sample.

There are two ways in which researchers choose the samples in this method of sampling: The lottery system and using number generating software/ random number table. This sampling technique usually works around a large population and has its fair share of advantages and disadvantages.

Stratified random sampling involves a method where the researcher divides a more extensive population into smaller groups that usually don’t overlap but represent the entire population. While sampling, organize these groups and then draw a sample from each group separately.

A standard method is to arrange or classify by sex, age, ethnicity, and similar ways. Splitting subjects into mutually exclusive groups and then using simple random sampling to choose members from groups.

Members of these groups should be distinct so that every member of all groups get equal opportunity to be selected using simple probability. This sampling method is also called “random quota sampling.” 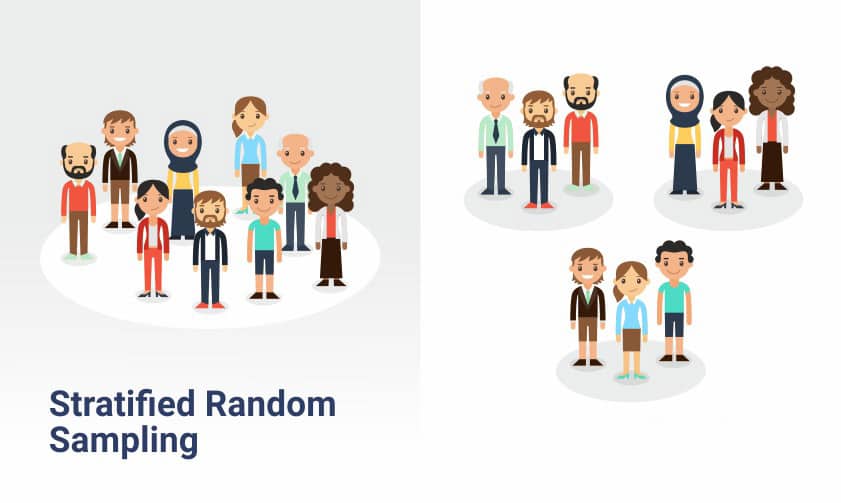 Random cluster sampling is a way to select participants randomly that are spread out geographically. For example, if you wanted to choose 100 participants from the entire population of the U.S., it is likely impossible to get a complete list of everyone. Instead, the researcher randomly selects areas (i.e., cities or counties) and randomly selects from within those boundaries.

Cluster sampling usually analyzes a particular population in which the sample consists of more than a few elements, for example, city, family, university, etc. Researchers then select the clusters by dividing the population into various smaller sections. 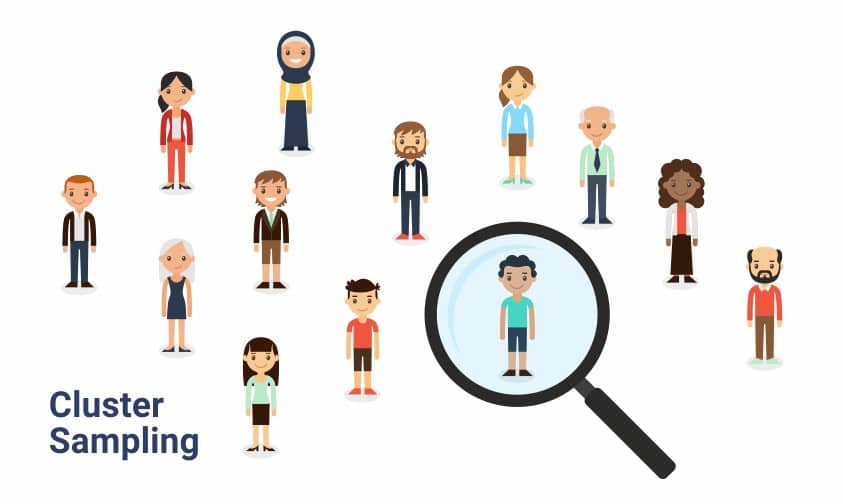 Systematic sampling is when you choose every “nth” individual to be a part of the sample. For example, you can select every 5th person to be in the sample. Systematic sampling is an extended implementation of the same old probability technique in which each member of the group is selected at regular periods to form a sample. There’s an equal opportunity for every member of a population to be selected using this sampling technique. 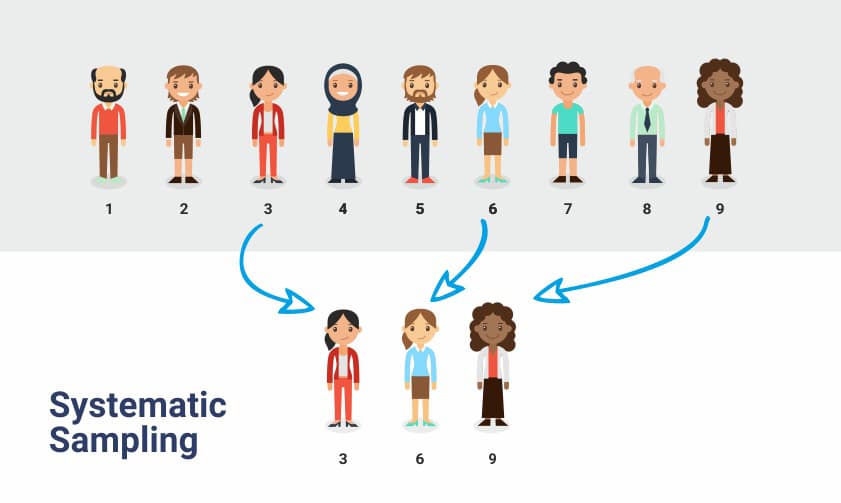 Let us take an example to understand this sampling technique. The population of the US alone is 330 million. It is practically impossible to send a survey to every individual to gather information. Use probability sampling to collect data, even if you collect it from a smaller population.

For example, an organization has 500,000 employees sitting at different geographic locations. The organization wishes to make certain amendments in its human resource policy, but before they roll out the change, they want to know if the employees will be happy with the change or not. However, reaching out to all 500,000 employees is a tedious task. This is where probability sampling comes handy. A sample from the larger population i.e., from 500,000 employees, is chosen. This sample will represent the population. Deploy a survey now to the sample.

From the responses received, management will now be able to know whether employees in that organization are happy or not about the amendment.

What are the steps involved in probability sampling?

1. Choose your population of interest carefully: Carefully think and choose from the population, people you believe whose opinions should be collected and then include them in the sample.

2. Determine a suitable sample frame: Your frame should consist of a sample from your population of interest and no one from outside to collect accurate data.

3. Select your sample and start your survey: It can sometimes be challenging to find the proper sample and determine a suitable sample frame. Even if all factors are in your favor, there still might be unforeseen issues like cost factor, quality of respondents, and quickness to respond. Getting a sample to respond accurately to a probability survey might be difficult but not impossible.

When to use probability sampling?

Use probability sampling in these instances: 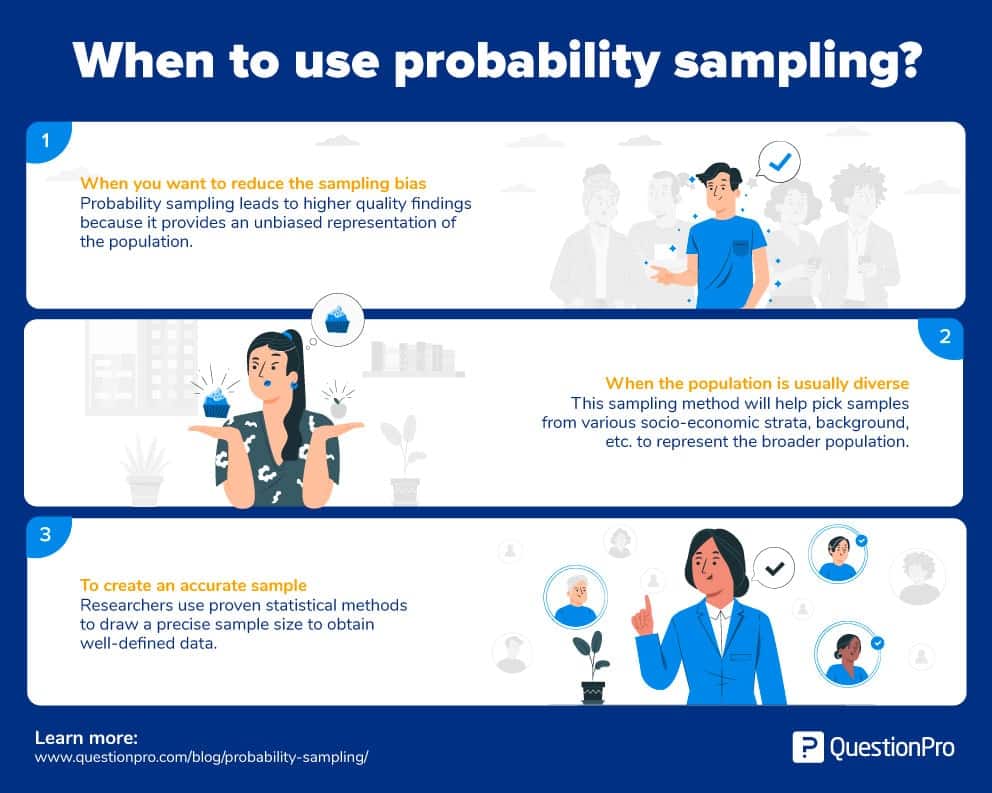 1. When you want to reduce the sampling bias: This sampling method is used when the bias has to be minimum. The sample selection largely determines the quality of the research’s inference. How researchers select their sample largely determines the quality of a researcher’s findings. Probability sampling leads to higher quality findings because it provides an unbiased population representation.

2. When the population is usually diverse: Researchers use this method extensively as it helps them create samples that fully represent the population. Say we want to find out how many people prefer medical tourism over getting treated in their own country. This sampling method will help pick samples from various socio-economic strata, background, etc. to represent the broader population.

Here are the advantages of probability sampling:

1. It’s Cost-effective: This process is both cost and time effective, and a larger sample can also be chosen based on numbers assigned to the samples and then choosing random numbers from the more significant sample.

2. It’s simple and straightforward: Probability sampling is an easy way of sampling as it does not involve a complicated process. It’s quick and saves time. The time saved can thus be used to analyze the data and draw conclusions.

3. It is non-technical: This method of sampling doesn’t require any technical knowledge because of its simplicity. It doesn’t require intricate expertise and is not at all lengthy.

What is the difference between probability and non-probability sampling?

Co-create with your online communities and collect qualitative and quantitative insights for your continuous discovery process. Choose from over 22 million + mobile-ready respondents to conduct ongoing market research studies.