What is a sample?

Definition: A sample is defined as a smaller set of data that a researcher chooses or selects from a larger population by using a pre-defined selection method. These elements are known as sample points, sampling units, or observations. Creating a sample is an efficient method of conducting research. In most cases, it is impossible or costly and time-consuming to research the whole population. Hence, examining the sample provides insights that the researcher can apply to the entire population.

Typically, the population for market research is enormous. Making an enumeration of the whole population is practically impossible. The sample usually represents a manageable size from this population. Researchers then collect data from these samples in the form of surveys, polls, and questionnaires, and extrapolates this data analysis to the broader community. 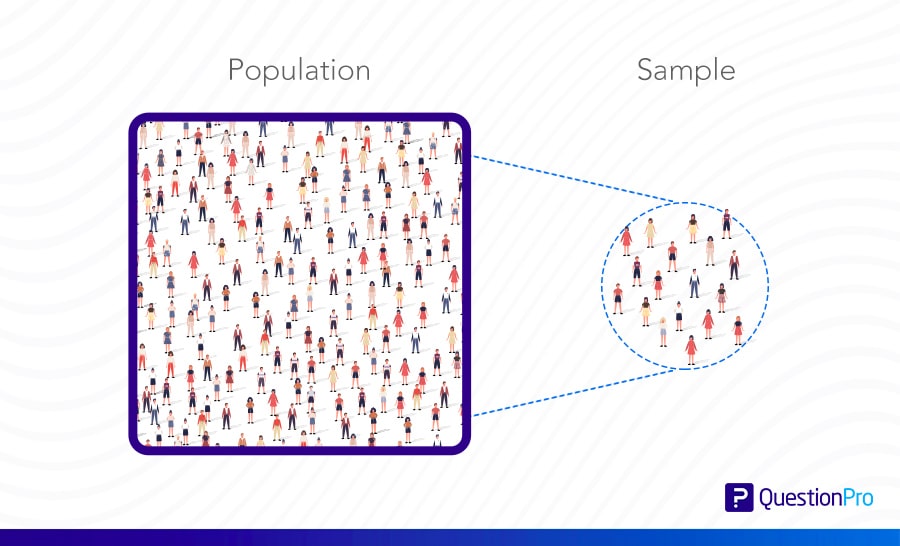 The process of deriving a sample is called a sampling method. Sampling forms an integral part of the research design as this method derives the quantitative data and the qualitative data that can be collected as part of a research study. Sampling methods are characterized into two distinct approaches: probability sampling and non-probability sampling.

Probability sampling is a method of deriving a sample where the objects are selected from a population-based on the theory of probability. This method includes everyone in the population, and everyone has an equal chance of being selected. Hence, there is no bias whatsoever in this type of sample. Each person in the population can subsequently be a part of the research. The selection criteria are decided at the outset of the market research study and form an important component of research.

Probability sampling can be further classified into four distinct types of samples. They are:

The non-probability sampling method uses the researcher’s discretion to select a sample. This type of sample is derived mostly from the researcher’s or statistician’s ability to get to this sample. This type of sampling is used for preliminary research where the primary objective is to derive a hypothesis about the topic in research. Here each member does not have an equal chance of being a part of the sample population, and those parameters are known only post-selection to the sample.

We can classify non-probability sampling into four distinct types of samples. They are:

How to determine a sample size

To calculate the sample size, you need the following parameters.

To calculate use the sample size, use this formula:

Consider the confidence level of 90%, standard deviation of .6 and margin of error, +/-4%

603 respondents are needed and that becomes your sample size.

Try our sample size calculator for give population, margin of error and confidence level.

As shown above, there are many advantages to sampling. Some of the most significant advantages are:

To collect accurate data for research, filter bad panelists, and eliminate bias by applying different control measures. If you need any help with arranging a sample audience for your next market research project, get in touch with us on sales@questionpro.com. We have more than 22 million panelists across the world!