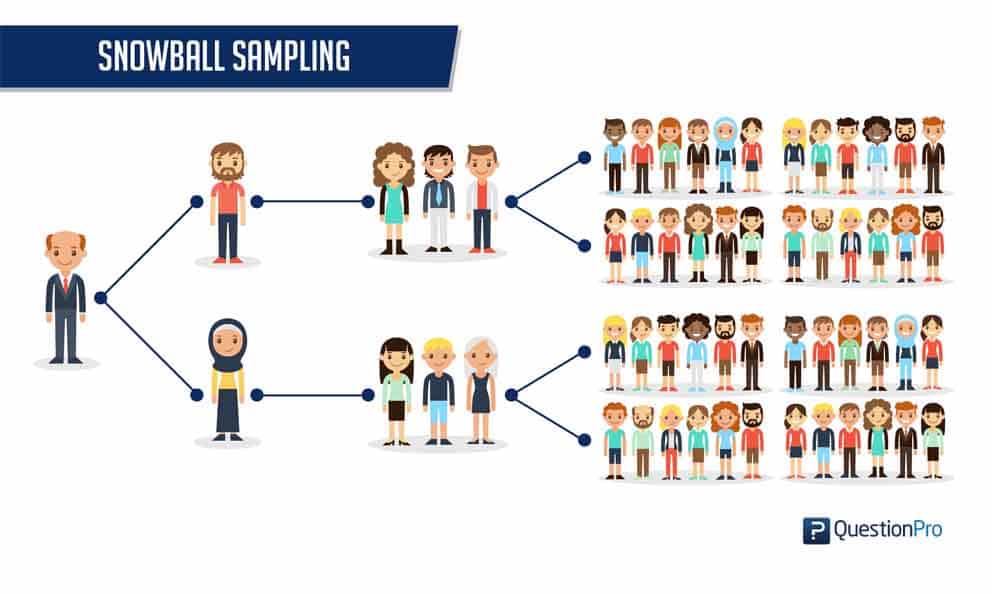 Snowball sampling or chain-referral sampling is defined as a non-probability sampling technique in which the samples have traits that are rare to find. This is a sampling technique, in which existing subjects provide referrals to recruit samples required for a research study.

For example, if you are studying the level of customer satisfaction among the members of an elite country club, you will find it extremely difficult to collect primary data sources unless a member of the club agrees to have a direct conversation with you and provides the contact details of the other members of the club.

Snowball sampling is a popular business study method. The snowball sampling method is extensively used where a population is unknown and rare and it is tough to choose subjects to assemble them as samples for research.

This sampling technique can go on and on, just like a snowball increasing in size (in this case the sample size) till the time a researcher has enough data to analyze, to draw conclusive results that can help an organization make informed decisions.

Learn more: How to Determine Sample Size for your Next Survey

The nature of snowball sampling is such, that it cannot be considered for a representative sample or in that case for statistical studies. However, this sampling technique can be extensively used for conducting qualitative research, with a population that is hard to locate.  Let us now explore how snowball sampling can be carried out:

Consider hypothetically, you as a researcher are studying the homeless in Texas City. It is obviously difficult to find a list of all the details of the number of homeless there. However, you are able to identify one or two homeless individuals who are willing to participate in your research studies.

The same strategy can be followed to conduct research or study individuals belonging to certain underground subculture, or individuals who have a hidden identity or are members of a cult etc. who don’t want to be identified easily.  Trust is an important part of any researcher.

An individual, who is ready to share information, needs to know that the information will be used discreetly and this kind of trust is especially important in snowball sampling. For a participant to agree to identify themselves or their group, researchers first need to develop that kind of rapport with the participants. Please know that this sampling technique may consume more time than anticipated because of its nature.

Snowball sampling analysis is conducted once the respondents submit their feedback and opinions. The data collected can be qualitative or quantitative in nature, and can be represented in graphs and charts on the online survey software dashboard such as the one provided by QuestionPro.

Thus, this type of sampling is preferred in the following applications:

Learn more about the other Non-Probability Sampling Techniques: