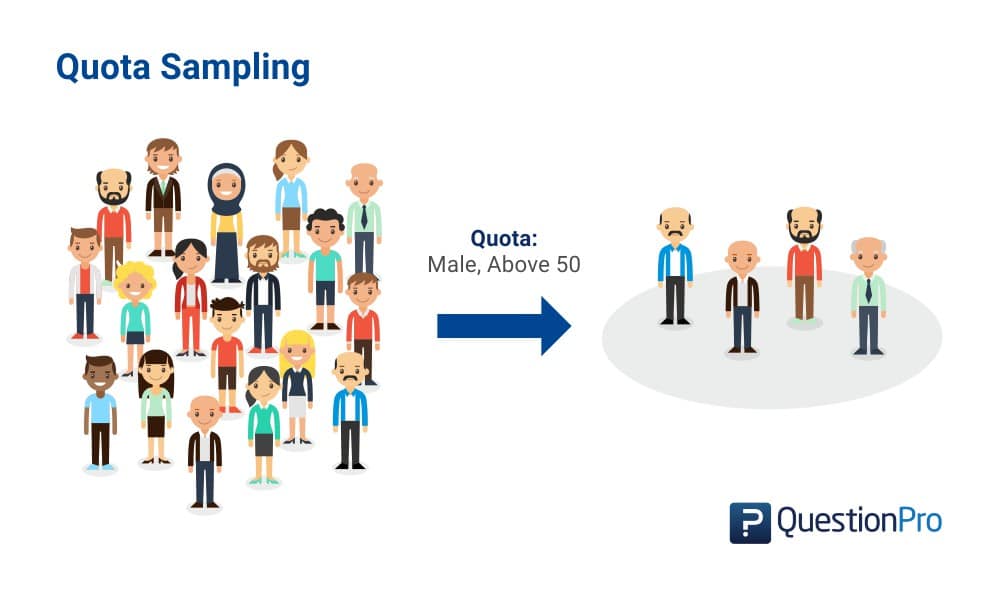 Quota Sampling is a non-probability sampling method in which researchers can form a sample involving individuals that represent a population and are chosen according to traits or qualities. Researchers can decide the trait as per which the sample subset selection will be conducted so that the sample can be effective in collecting data that can be generalized to the entire population. The final subset will be decided only according to the interviewer or researcher’s knowledge of the population.

In the initial stages of a study, researchers can collect representative data from a sample formed using the quota sampling method. It is very similar to stratified random sampling, which is a probability sampling method. The main difference between these two techniques is that, in quota sampling, the elements of the sample are not chosen randomly from each stratum like it is done in stratified random sampling.

Researchers usually prefer non-probability sampling techniques such as convenience sampling and quota sampling in situations where there are financial or time restrictions for research. Also, in some cases where the speed of research is more precious than the precision of the obtained results, this sampling method is relied upon.

There are two main points that a researcher should be aware of, for accurate strata creation:

For instance, a researcher can create a quota sample by dividing the entire population according to age, gender, state etc. They should take into consideration the proportion of each group (strata). If your target population has 40% females and 60% males, the quota sample should also include elements in the same ratio otherwise the obtained results will be highly skewed.

The prime most step is to bifurcate the entire population into mutually exhaustive subgroups, i.e., the elements of each of the subgroups should be a part of only one of those subgroups.

For example, if a researcher wishes to understand his/her target market for an upcoming Bluetooth headphones variant, the most precise niche that can be targeted will be according to age groups.

The researcher is expected to evaluate the proportion in which the subgroups exist in the population. This proportion has to be maintained in the in the sample selected using this sampling method.

For example, if 58% of the people who are interested in purchasing your Bluetooth headphones are between the age group of 25-35 years, your subgroups also should have the same percentages of people belonging to the respective age group.

In the third step of quota sampling, the researcher should select the sample size while maintaining the proportion evaluated in the previous step. If the population size is 500, the researcher can pick a sample of 50 elements.

The sample chosen after following the first three steps should represent the target population.

When a researcher seeks to conduct a comparative market analysis of how a product is dealt with, by different age groups, socio-economic backgrounds and also gender. Quotas are created within the target population according to these three variables.

The researcher can create multiple strata on the basis of three variables by considering the proportion of each variable that exists within the population. According to the mode of research, online or offline, the researcher can conduct surveys, polls or questionnaires to collect data for their study.

Another example of quota sampling is a situation where an interviewer wishes to understand how well his/her shoe brand perform. Their target population is between the age group of 25-40 years. The interviewer can further divide strata according to gender and select 100 females and males belonging to that population group. Because the strata are divided according to gender, they will be unique as a person cannot be both, female and male. The researcher can create subsets of the decided subgroups according to his/her knowledge of the population, i.e., they can decide whether to interview a filtered list from their customer list using online mediums or conduct a survey within the workforce by keeping the proportion of males and females constant.

When to implement Quota Sampling

CHOOSE YOUR RESEARCH SAMPLE
IN THREE EASY STEPS
GET STARTED