Sampling Bias: What it is, Examples & How to Avoid It

What is sampling bias?

Sampling bias or a biased sample in research occurs when members of the intended population are selected incorrectly – either because they have a lower or a higher chance of being selected.

The most popular and easily understandable example of sampling bias is Presidential election voters. If you poll 1000 middle-class, blue collar voters, the sample will be heavily biased because it won’t be diverse enough to paint the whole picture. It leaves out multiple demographics that are necessary to draw an accurate conclusion.

Causes and types of sampling bias

There are many causes of bias in sampling that researchers need to keep an eye out for. Here are the most common ones:

Undercoverage is one of the biggest causes of sampling bias because researchers’ failure to accurately represent the sample. The main reason for this undercoverage is inadequately representing the population or collecting responses only from easily available respondents by using convenience sampling. Running national surveys online fall under this risk category of undercoverage because they tend to miss out on the elderly and those with limited or no access to the internet.

A fair representation of the population helps you get accurate results to the survey. But it means that you need to take extra efforts to ensure you do not miss out on different demographics.

Researchers want to understand the effect of a new traffic law in a city and so conduct a survey via convenience sampling inside a mall. The study is highly likely to suffer undercoverage from the following groups:

Voluntary response bias is also known as self-selection bias where respondents possessing specific characteristics more willingly take part in the research than others. This happens when they have control over the study participation. Here the respondents are not neutral and most tend to lean towards one topic because they identify with it.

Self-selection causes undesirable outcomes to the study and affects the rationality of the study. Voluntary response bias also occurs due to people’s desire to stay away from the topic, even though their opinions matter. Thus the results of the study represent only people who have strong opinions about the topic and leave out the rest, overrepresenting the sample.

Call-in TV or radio shows are the best examples of voluntary bias where only respondents interested in the topic dial-in and take part in the study.

Survivorship bias too is a common type of sample bias where the researcher concentrates only on the sample that passes the selection criteria and ignores those who failed to pass. The problem with survivorship bias is that the results come in highly optimistic, thus not giving the whole picture to the researcher. The opinions of the variables that failed to make the criteria are ignored, making the results one-sided. A lack of visibility leads to a logical error and skews the end results.

Studying business performances in a certain industry may not take into account organizations that have failed and cease to exist now. The results may look positive due to survivorship bias but do not represent the whole industry accurately.

Respondents who refuse to take part in studies and drop out of research cause non-response bias. Non-response occurs due to the inability of a chunk of the target population to take part in the survey because they choose not to. Participation bias happens due to multiple reasons causing a huge bias in studies. Many choose to drop out due to the length or the structure of questions in the study.

Requesting sensitive information from a sample is one of the main causes of non-response bias. Many respondents may not feel comfortable answering questions about family, income, sexual preferences, drug use and other such personal details leading to bias in responses.

Recall bias simply happens when respondents can’t remember things correctly. You can’t do much to mitigate recall bias but can only consider it as a common error in data collection. Recall bias is very common in surveys as human memory is imperfect and they have a selective memory by default. It’s not how good or bad one is at remembering things. The best time to avoid recall bias is to interview respondents when their memory is fresh with the occurrence.

Observer bias is caused by researchers when they themselves influence the expectations of the research – either consciously but largely subconsciously. It occurs due to cherry-picking by only looking into a specific group of statistics or influencing participants during interviews. A good survey design can mitigate this bias and can be totally controlled by the researcher.

How to avoid sampling bias

While totally avoiding sampling bias is too much to ask, controlling it to an extent is possible. Here are some tips to avoid sampling bias. 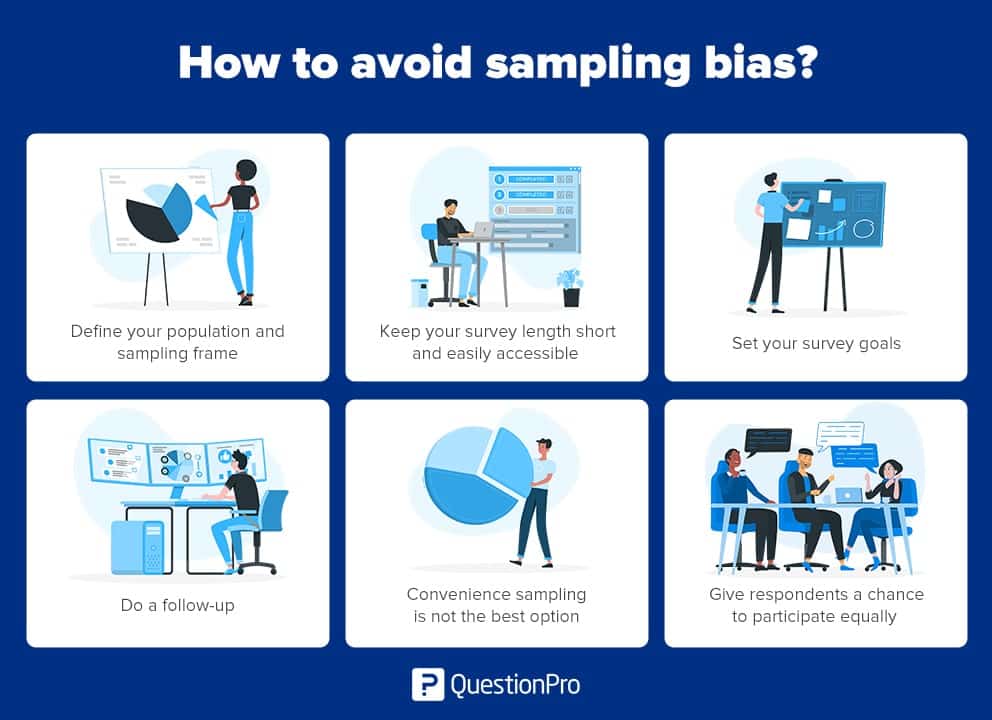 The importance of stratified random sampling

Conducting stratified random sampling is a great way to bring down bias levels in your studies. It gives researchers a chance to examine the population accurately and create an accurately representative sample.

For example, if there are 5,000 individuals in your population – 50% males and 50% females, and 100 people are required to conduct the study, 50 males and 50 females should be chosen to accurately represent the population split. Stratified sampling helps researchers avoid bias in the beginning by creating awareness of the sampling mix.

One good way to avoid sampling bias is having a large pool of participants to choose from for your study. A larger to choose from gives researchers the chance of sampling accurately according to the population. QuestionPro Audience houses millions of double-opted online survey respondents across the globe to choose from for any type of study. Choose your sampling partner wisely to capture accurate information and run successful research studies.