Data is the new oil; here’s how you can drill it using correlation analysis

Example: two variables like your body weight and daily calorie intake have a higher correlation. On the contrary, dog names and the brand of dog biscuits preferred by dogs will have a very low correlation.

Is data the new oil?

Once upon a time, the oil used to rule the global economy. It was an immensely precious asset of the 18th century. Without oil, economies used to shrink, governments used to tumble, and progress used to halt. Welcome to the future – a particular innovative wonder is fantastic the world; the advent of technology and the flow of data marked the beginning of the new global dominator. Around a decade ago, we heard what Clive Humby said – “Data is the new oil.”

According to Clive, data is a commodity, and if treated just like oil, data is also a resource of no value if it remains unrefined. Similar to oil, data also needs a proper drilling technique so that value can be retrieved from it. Remember, correlation analysis is a data drilling technique, and in no way, you can use it for drilling oil.

When you want to determine correlation through data analysis, there are two types of data you need to work with

Bivariate Data: Correlation analysis is more about studying the relationship between two variables at the same time. Example, the price of a product versus average sales of the product or age versus blood pressure of a person. Thus, two characters of the same entity, when measured simultaneously with the help of statistical analysis then we term it as a bivariate data.

If there is any correlation between two variables, then whenever there is a systemic change is one variable, the other variable also changes. Thus, the variables alter together over a while. The correlation, therefore, found can be either positive or negative, depending on the measured numerical values.

How to use correlation analysis?

Correlation analysis to drill down and drill through data

Be it any data, the primary methods used for data analysis are statistical analysis. Majority of quality management methods as if Six Sigma happen to be statistic intensive applying a variety of statistical techniques for data analysis and confirm the extent of deviation from the standard mean. These analytical techniques are very much useful in the long run for uncovering the precise information that will lead to decisions making and effective results.

Drill down and drill through are two significant and compelling data analysis techniques. Drill down is a method that is used to get a more specific view of the data. On the contrary, drill through technology is helpful to retrieve insights relevant to the purpose of analyzing data.

Do you think economies having plenty of oil resources are the wealthiest? Sadly, NO! But the countries having advanced potential to refine the oil are undoubtedly amongst the most prosperous economies. Just like oil, the value of data increases in many folds when it is improved. A refined data gives us information; this information is then converted to knowledge, and the experience thus gained is utilized to make decisions for getting expected results.

Data drilling is not something related to excel analytics, but it is beyond that; it covers 5 V’s – Volume, Velocity, Variety, Veracity, and Value. In addition to that, data drilling adds 3 A’s value to the raw data. A refined data in the form of ‘Analytics’ is smartly transformed into sequences of instructions resembling ‘Algorithm,’ these sequences of instructions are further developed into a consistent platform for running multiple programs like ‘Applications.’

The scatter diagram method is a naive approach in correlation analysis used to find the correlation between two variables. The relationship between the two variables is diagrammatically presented to understand how closely they are related to each other. 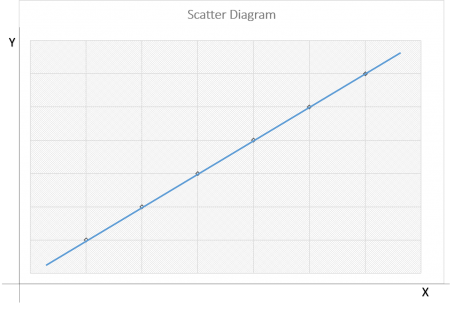 Also called the ‘product-moment correlation coefficient (PMCC) or simply ‘correlation.’ It is defined as a number between -1 and 1, indicating the extent to which the two variables are linearly related.

It is a non-parametric version of the Perasnos’s coefficient correlation. This method is utilized to measure the strength and direction of relationship or association existing between the two variables.

It is a mathematical problem used to find the degree of correlation between the two variables by using the square root of the product of two regression coefficient that of ‘x’ on ‘y’ and ‘y’ on ‘x.’

If data is the new oil, then data analysis is the combustion engine that generates mechanical power to derive insights and gain knowledge. Gone are the days when descriptive and diagnostic analytics used to rule the data analysis regime. It’s time we move on to predictive, perspective, and cognitive analysis.

Similar to oil, people are finding new ways and sources to generate data. With evolving technology, we are finding new and better ways to collect data efficiently and options to refine this considerable amount of data with specialized techniques.

Do you know a barrel of crude oil costs less compared to a barrel of jet fuel? It is because refining crude oil yields jet fuel, which further increases in value by 33% to 35%. Similarly – you need to process data to gain maximum benefit. We, at QuestionPro, make it easier for you to drill and refine your survey data.