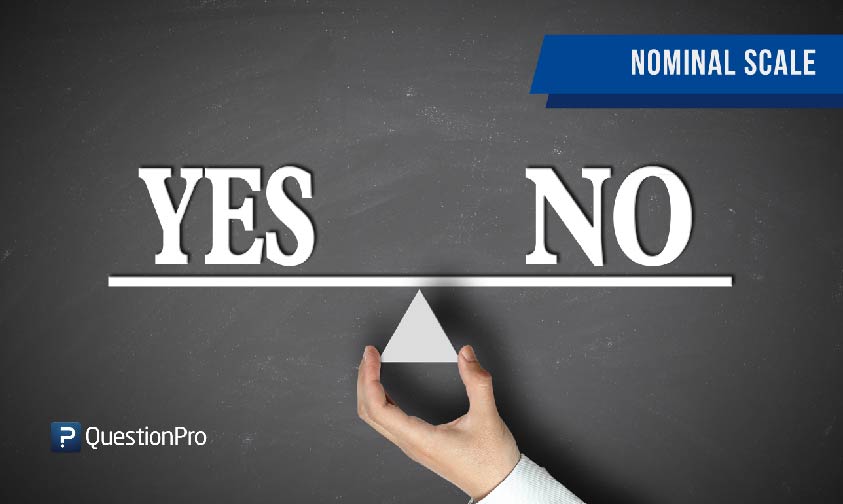 A Nominal Scale is a measurement scale, in which numbers serve as “tags” or “labels” only, to identify or classify an object. A nominal scale measurement normally deals only with non-numeric (quantitative) variables or where numbers have no value.

Below is an example of Nominal level of measurement.

Please select the degree of discomfort of the disease:

In this particular example, 1=Mild, 2=Moderate, and 3=Severe. Here numbers are simply used as tags and have no value.

Nominal scale possesses only the description characteristic which means it possesses unique labels to identify or delegate values to the items. When nominal scale is used for the purpose of identification, there is a strict one-to-one correlation between an object and the numeric value assigned to it. For example, numbers are written on cars in a racing track. The numbers are there merely to identify the driver associated with the car, it has nothing to do with characteristics of the car.

But when nominal scale is used for the purpose of classification, then the numbers assigned to the object serve as tags to categorize or arrange objects in class. For example, in the case of a gender scale, an individual can be categorized either as male or female. In this case, all objects in the category will have the same number, for example, all males can be no. 1 and all females can be no. 2. Please note, that nominal is purely used for counting purposes.

From a statistics point of view nominal scale is one of the easiest to understand measurement scale. As mentioned earlier, nominal scale is assigned to items that are not quantitative or number oriented.

For example, let’s assume we have 5 colors, orange, blue, red, black and yellow. We could number them in any order we like either 1 to 5 or 5 to 1 in ascending or descending order. Here numbers are assigned to colors only to identify them. Another example of nominal scale from a research activity point to view is YES/NO scale. It essentially has no order.

Create a Nominal Scale Survey: Get Your Free Account Now

Here are some of the examples of nominal measurement that will help in understand this measurement scale better.

There is a subtype in nominal scale with only two categories like one of the nominal scale examples mentioned above: Gender- Male/Female.

Or, do you own an iPhone? The answer could be Yes/No.

This subtype is known as dichotomous nominal scale.

The point of this concluding note in this blog is to keep everyone informed, that the classification of variables according to their measurement is useful in concluding which analytical procedure is useful for a researcher.

In nominal scale, it is easy to generate responses using close ended questions, a lot of responses can be collected in short period of time, which in turn increases reliability. However, there is a downside to the scale, without a linear scale, participants are unable to express their degrees of response.

Create a Nominal Scale Survey: Get Your Free Account Now