Levels of Measurement in Statistics

To perform statistical analysis of data, it is important to first understand variables and what should be measured using these variables. There are different levels of measurement in statistics and data measured using them can be broadly classified into qualitative and quantitative data.

First,  let’s understand what a variable is.  A quantity whose value changes across the population and can be measured is called variable. For instance, consider a sample of employed individuals. The variables for this set of the population can be industry, location, gender, age, skills, job-type, paid time off, etc The value of the variables will differ with each employee spotlight.

What are Nominal, Ordinal, Interval and Ratio Scales?

Nominal, Ordinal, Interval, and Ratio are defined as the four fundamental levels of measurement scales that are used to capture data in the form of surveys and questionnaires, each being a multiple choice question.

Each scale is an incremental level of measurement, meaning, each scale fulfills the function of the previous scale, and all survey question scales such as Likert, Semantic Differential, Dichotomous, etc, are the derivation of this these 4 fundamental levels of variable measurement. Before we discuss all four levels of measurement scales in details, with examples, let’s have a quick brief look at what these scales represent.

Here’s more of the four levels of measurement in research and statistics: Nominal, Ordinal, Interval, Ratio. 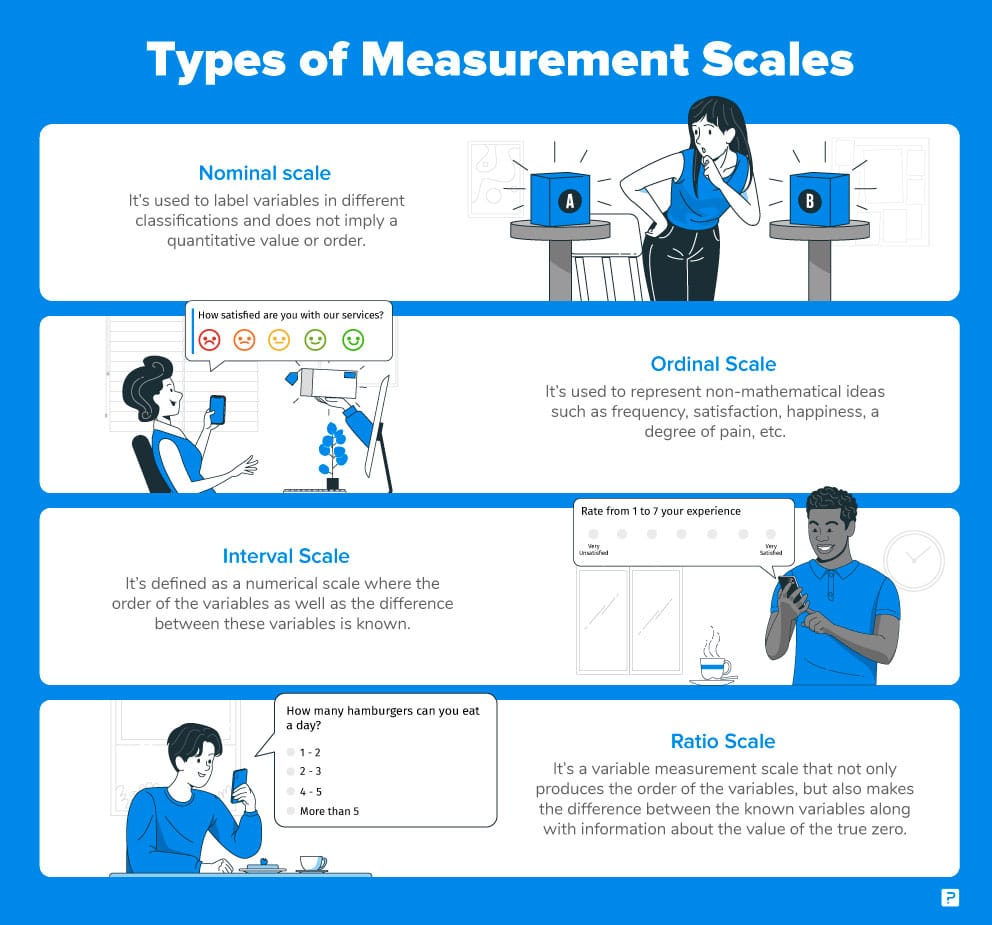 Nominal Scale, also called the categorical variable scale, is defined as a scale used for labeling variables into distinct classifications and doesn’t involve a quantitative value or order. This scale is the simplest of the four variable measurement scales. Calculations done on these variables will be futile as there is no numerical value of the options.

There are cases where this scale is used for the purpose of classification – the numbers associated with variables of this scale are only tags for categorization or division. Calculations done on these numbers will be futile as they have no quantitative significance.

For a question such as:

Where do you live?

Nominal scale is often used in research surveys and questionnaires where only variable labels hold significance.

For instance, a customer survey asking “Which brand of smartphones do you prefer?” Options : “Apple”- 1 , “Samsung”-2, “OnePlus”-3.

There are two primary ways in which nominal scale data can be collected:

In both cases, the analysis of gathered data will happen using percentages or mode,i.e., the most common answer received for the question. It is possible for a single question to have more than one mode as it is possible for two common favorites can exist in a target population.

In SPSS, you can specify the level of measurement as scale (numeric data on an interval or ratio scale), ordinal, or nominal. Nominal and ordinal data can be either string alphanumeric or numeric.

Upon importing the data for any variable into the SPSS input file, it takes it as a scale variable by default since the data essentially contains numeric values. It is important to change it to either nominal or ordinal or keep it as scale depending on the variable the data represents.

Ordinal Scale is defined as a variable measurement scale used to simply depict the order of variables and not the difference between each of the variables. These scales are generally used to depict non-mathematical ideas such as frequency, satisfaction, happiness, a degree of pain, etc. It is quite straightforward to remember the implementation of this scale as ‘Ordinal’ sounds similar to ‘Order’, which is exactly the purpose of this scale.

Ordinal Scale maintains descriptional qualities along with an intrinsic order but is void of an origin of scale and thus, the distance between variables can’t be calculated. Descriptional qualities indicate tagging properties similar to the nominal scale, in addition to which, the ordinal scale also has a relative position of variables. Origin of this scale is absent due to which there is no fixed start or “true zero”.

Ordinal scale data can be presented in tabular or graphical formats for a researcher to conduct a convenient analysis of collected data. Also, methods such as Mann-Whitney U test and Kruskal–Wallis H test can also be used to analyze ordinal data. These methods are generally implemented to compare two or more ordinal groups.

Learn about: Nominal vs. Ordinal Scale

Status at workplace, tournament team rankings, order of product quality, and order of agreement or satisfaction are some of the most common examples of the ordinal Scale. These scales are generally used in market research to gather and evaluate relative feedback about product satisfaction, changing perceptions with product upgrades, etc.

For example, a semantic differential scale question such as:

How satisfied are you with our services?

This scale not only assigns values to the variables but also measures the rank or order of the variables, such as:

How satisfied are you with our services?

Interval Scale is defined as a numerical scale where the order of the variables is known as well as the difference between these variables. Variables that have familiar, constant, and computable differences are classified using the Interval scale. It is easy to remember the primary role of this scale too, ‘Interval’ indicates ‘distance between two entities’, which is what Interval scale helps in achieving.

These scales are effective as they open doors for the statistical analysis of provided data. Mean, median, or mode can be used to calculate the central tendency in this scale. The only drawback of this scale is that there no pre-decided starting point or a true zero value.

Interval scale contains all the properties of the ordinal scale, in addition to which, it offers a calculation of the difference between variables. The main characteristic of this scale is the equidistant difference between objects.

Even if interval scales are amazing, they do not calculate the “true zero” value which is why the next scale comes into the picture.

All the techniques applicable to nominal and ordinal data analysis are applicable to Interval Data as well. Apart from those techniques, there are a few analysis methods such as descriptive statistics, correlation regression analysis which is extensively for analyzing interval data.

Descriptive statistics is the term given to the analysis of numerical data which helps to describe, depict, or summarize data in a meaningful manner and it helps in calculation of mean, median, and mode.

The following questions fall under the Interval Scale category:

With the option of true zero, varied inferential, and descriptive analysis techniques can be applied to the variables. In addition to the fact that the ratio scale does everything that a nominal, ordinal, and interval scale can do, it can also establish the value of absolute zero. The best examples of ratio scales are weight and height. In market research, a ratio scale is used to calculate market share, annual sales, the price of an upcoming product, the number of consumers, etc.

At a fundamental level, Ratio scale data is quantitative in nature due to which all quantitative analysis techniques such as SWOT, TURF, Cross-tabulation, Conjoint, etc. can be used to calculate ratio data. While some techniques such as SWOT and TURF will analyze ratio data in such as manner that researchers can create roadmaps of how to improve products or services and Cross-tabulation will be useful in understanding whether new features will be helpful to the target market or not.

The following questions fall under the Ratio Scale category:

Learn about: Interval vs. Ratio Scale

The four data measurement scales – nominal, ordinal, interval, and ratio –  are quite often discussed in academic teaching. Below easy-to-remember chart might help you in your statistics test.