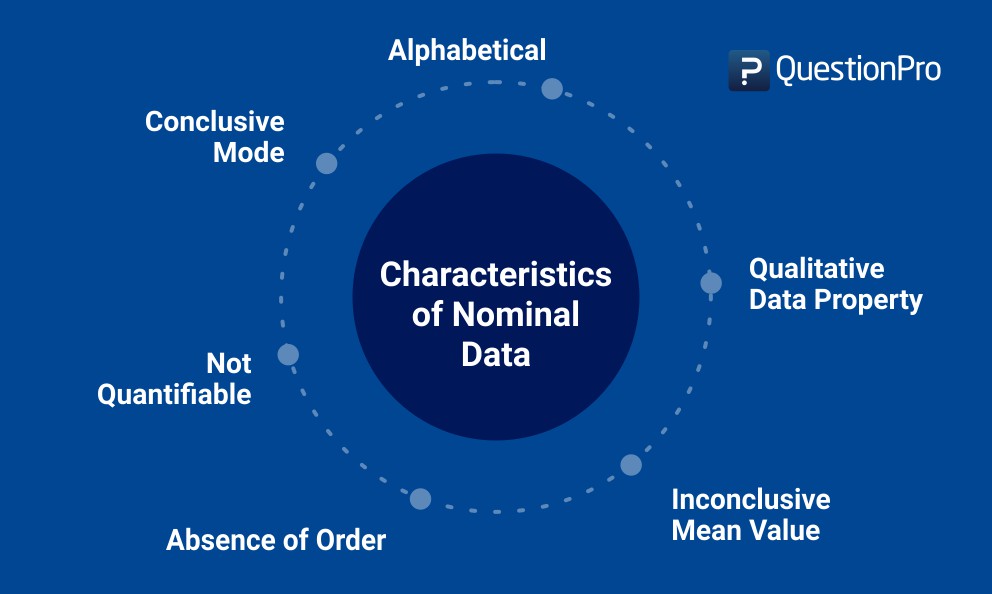 Nominal data is “labeled” or “named” data which can be divided into various groups that do not overlap. Data is not measured or evaluated in this case, it is just assigned to multiple groups. These groups are unique and have no common elements. The order of the data collected can’t be established using nominal data and thus, if you change the order of data its significance of data will not be altered.

In Latin nomenclature “Nomen” means – Name. Nominal data does present a similarity between the various items but details regarding this similarity might not be disclosed. This is merely to make the data collection and analysis process easier for researchers. In some cases, nominal data is also called “Categorical Data”.

What is your ethnicity? –

Most nominal data is collected via questions that provide the respondent with a list of items to choose from, for example:

Which state do you live in? ____ (followed by a drop-down list of states)

There are three ways that nominal data can be collected. In the first example, the respondent is given space to write in their home state. This is a form of the open-ended question that will eventually be coded with each state being assigned a number. This information could also be provided to the respondent in the form of a list, where they would select one option.

The second example is in the form of multiple response questions where each category is coded 1 (if selected) and 0 if not selected. It also incorporates an open-end component allowing the respondent the option of writing in a category not included in the list. These ‘other please specify’ responses’ will need coding if they are to be analyzed.

Nominal data is analyzed using percentages and the ‘mode’, which represents the most common response(s). For a given question there can be more than one modal response, for example, if olives and sausage both were selected the same number of times.

Multiple response questions, e.g. the pizza topping example listed above, allow researchers the ability to create a metric variable which can be used for additional analysis. In this scenario, the respondent can select any or all options providing you with a variable that ranges from zero (none selected) to the maximum number of categories. This becomes a useful tool for consumer segmentation.

Nominal data is best used for profiling your respondents. Although limited in it statistical abilities this type of data is critical for gaining a deeper understanding of your survey respondents. Next, we will examine ordinal data.

In each of the below-mentioned examples, there are labels associated with each of the answer options only with the purpose of labeling. For instance, in the first question – each of the dog breeds is assigned numbers, while in the second question – both the genders are assigned corresponding initials, solely for convenience.