Thurstone vs Guttman Scale: Is There a Difference? 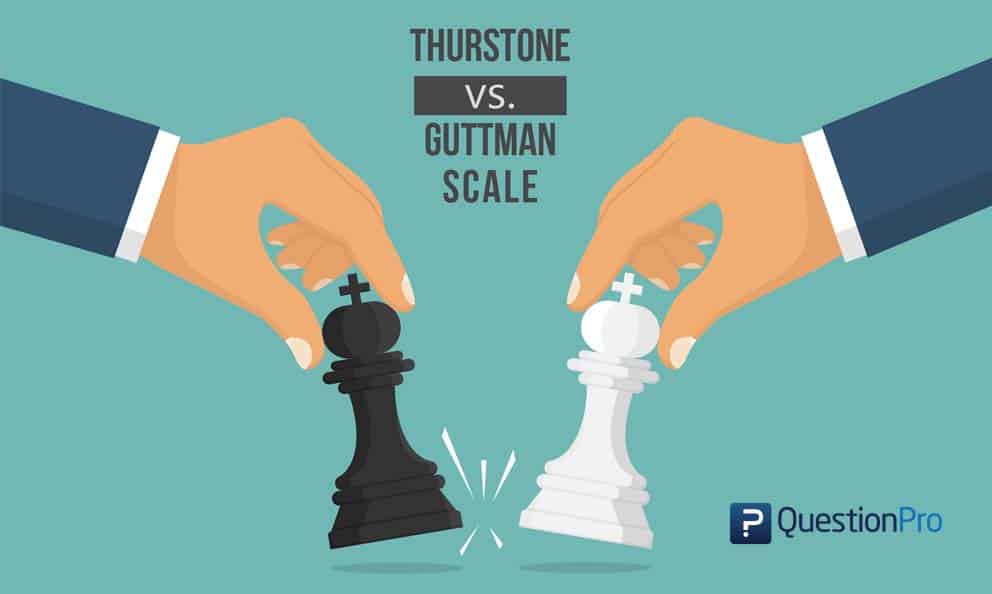 Attitude measurement is an important parameter to understand the thoughts and opinions about a target sample. Attitude measurement surveys have been successful in gaining feedback on respondents attitudes about the topic under discussion. These surveys are carefully curated with structured question types and scales.

This is where attitude scales come into the picture. Scales are used to associate a numerical value with respondent behavior and thoughts. It is possible to have a number corresponding to attitudes only when the attitude is considered accountable on only one scale (uni-dimensional scale).

These scales can be classified into: Nominal, Ordinal or Interval scales and practically, there is a well-constructed process for attitude scaling such as Likert, Guttman, Bogardus or Thurstone. Thurstone and Guttman scales are two of the most distinctive attitude measurement scales of all used to refer respondent behavior in real-life phenomenon with observation-based research.

Thurstone scale was designed by psychologist Robert Thurstone in an attempt to equate interval scale of measurement with the attitude scale and introduce a scale with statements appearing at equal intervals. While Guttman scale is a cumulative scale developed by Louis Guttman in 1944 – 1950 used to analyze the continuum for the topic of research, i.e., if in a list of 10 questions, if the respondent agrees to the 8th statement – it depicts that he/she agrees with the preceding questions as well and does not agree with the 9th and 10th statements.

How to construct a Thurstone Scale?

Predicting results and setting comparison of various feedbacks is much more convenient than attempting to quantify something as intricate as respondent attitudes. Thurstone is a systematic technique to perform the process of differentiating and forecasting results.

Thurstone scale was traditionally implemented in sociology and psychology. It is constructed by taking multiple “agree-disagree” statements with values corresponding to each of these statements. Thus, Thurstone scale is used to ascertain respondent opinions and feelings and the intensities of those respective opinions.

There are four main steps of constructing a Thurstone scale:

Step 1: Gather statements regarding the topic in-hand which will possibly have a broad scope of responses  – usually from extremely unfavorable to extremely favorable.

For example, if a researcher intends to learn about opinions related to Trump’s win in the presidential elections, he/she needs to accumulate a list of statements –

Step 2: Statements that do not contribute towards the objective of research can be discarded. The ones that are selected are then sent out to a group of people/judges for further filtration.

Each statement is to be rated in terms of overall favorability and not on the basis of personal inclinations.

Step 4: Every statement will have a rating on the 1-11 scale. This number corresponding to each statement will be an average of the ratings provided by multiple judges. The statements which can’t be rated by the judges are usually not considered for further analysis.

After discussing all the statements and eliminating undesired ones, a final list of statements for Thurstone scale can be created. This scale can then be sent out to the target audience in order to compare and predict the results.

For example, in the above example, the least rate statements are the least favorable by the judges. If the respondents are of the opinion that they favor statements number 1, 3 and 5,  the Thurstone score will be = 8.2+9.5+1.8/3= 6.5

How to construct a Guttman Scale?

In many cases, the strength of respondent opinions is more important than the opinions themselves. Guttman scale, also popularly known as cumulative scale, has a series of statements chosen by a careful rating process. From this list of statements, it is subsumed that a respondent agrees particular item also chooses to agree with the preceding statements.

There are multiple grievous issues where it is important to know the strength of respondent opinions as opposed to just their opinions. Guttman scale project the severity of the opinion by including a list of dichotomous questions in terms of “agree-disagree” or “yes-no”.

This cumulative scale has been used in understanding customer satisfaction and also employee engagement.

To explain the process of constructing a Guttman scale, we can take the above-mentioned example – Trump’s win in the presidential elections. Ever since Trump’s success at the elections, the U.S has been divided into two sections – one that fathoms Trump for all his endeavors and one that criticizes him for his every move.

A Guttman scale can be developed by following the below mentioned steps.

Step 1: Have a defined purpose of using Guttman Scale: For any scaling technique to be productive, the purpose of constructing it should be well-defined. In the example under discussion, the researcher must decide the intent of having statements related to Trump in the survey.

Step 2: Note down a series of statements: A researcher can obtain impactful insights into the value of the statements only if there are various statements related to Trump.

It is advisable to create a list of 80-100 statements before getting them evaluated by judges in order to receive accurate results.

Step 3: Assign values to every statement –  The list of 80-100 statement has to be rated by subject matter experts. Each one of these experts is supposed to rate every statement. The experts are expected to submit their agreement or disagreement with the mentioned statements. This feedback should not be governed by their personal opinions and should rather be in favor of the study.

Step 4: Format the statements for analysis: This step is critical for research. The statements are usually produced in Matrix format.

In the matrix above, in the first row, if someone agrees to statement 7, it indicates that the individual must have agreed to all the statements before that, i.e. – statement 1 to statement 6.

There certain exceptions in the rating process but usually for those respondents who agree to statement 5 would have agreed to the statements that lead up to it  – i.e., 1 to 4.

Data analysis with a limited number of statements and the target audience is easy but when a considerably large data is collected, it becomes important to conduct careful analysis. In that case, marketers are expected to analyze a subset that is closest to the desired cumulative.

Various statistical methods can be used for the analysis purpose of this scale and the quantitative data collected can also have representative values while calculating.

Step 5: Decide the Guttman scale – On the basis of the judgment by experts, those statements with the least agreement can be eliminated from the final scale and a filtered list of statements can be sent to the respondents. Respondents are supposed to submit their agreement or disagreement with the final statements.

For the example of Trump winning the elections, the order of the statements can be as mentioned below: