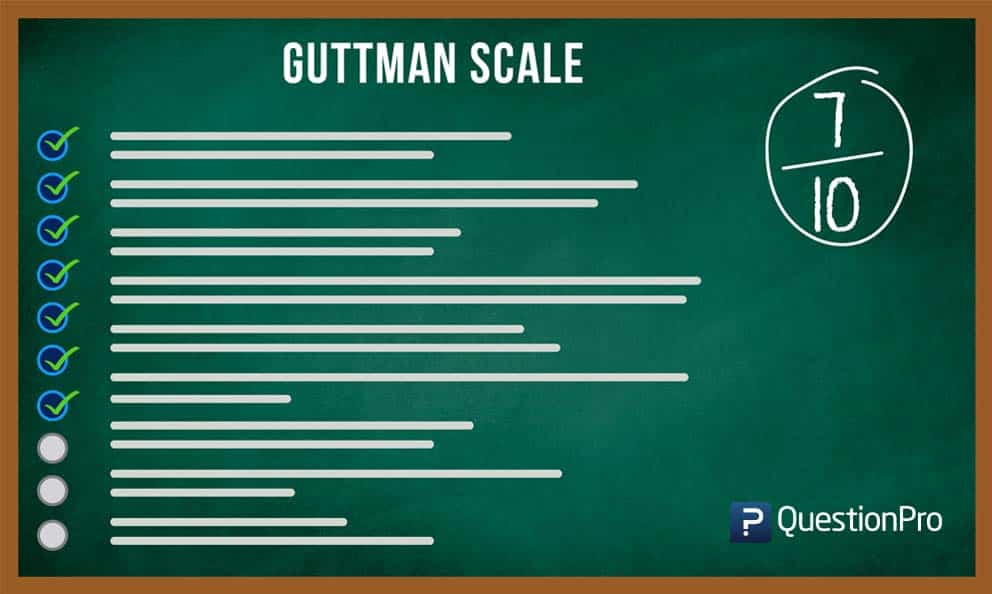 Guttman scale is one of the three unidimensional scales, the other two being – Likert Scale and Thurstone Scale. Guttman scale also called cumulative scaling or scalogram analysis is created with elements that can possibly be ordered in a hierarchical manner. It is representative of the extreme “attitude” of respondents, i.e. extremely positive or negative, about the subject in-hand.

Guttman scale has a list of statements. It can be inferred that respondents who agree to the statement placed at the end of this list, would have agreed to all the other statements above the last one. Each statement will have a corresponding weight associated with it. The cumulation of the weight according to respondent feedback will help researchers in predicting the number of statements agreeable to the respondents. For example, on a 5 scale Guttman scale, if a respondent scores 3 – it indicates that he/she has agreed to the first 3 statements of the scale if a different respondent scores 5 – it indicates that he/she has agreed to all the statements on this cumulative scale.

The main goal of this scale is to filter those respondents who comply with 100% of the statements mentioned in the scale. But, practically it is highly improbable that respondents totally comply with a series of statements and thus, scalogram analysis is conducted to evaluate the closest set of statements that the target audience agrees with. Bogardus scale is a populat example of the Guttman scale.

Steps for developing a Guttman Scale with Examples

To explain the process of developing a Guttman scale in detail, we will be considering an example – After the school shootings across the U.S., should laws be designed for the staff and administration to carry guns to school? It has been a raging topic amongst students after the intensity of the shootings has enhanced over the past few years. There are five main steps in the process of developing a Guttman scale.

Guttman scale statements are often expected to be 80-100 in number for reasonable results.

In the above-mentioned matrix, in the first row, if someone agrees to statement 5, it indicates that the individual must have agreed to the preceding statements, i.e. – statement 1 to statement 4.

In case there is a restrictive list of statements, it is extremely convenient for marketers to analyze data but when a large data is collected, analysis becomes a tough step. In that case, marketers are expected to analyze a subset that is closest to the desired cumulative.

There are various statistical analysis techniques to analyze collected data to form a closest to ideal Guttman scale. This quantitative data also represents the value of each of the items in the scale.

For the example of laws against school shooting, the order of the statements can be as mentioned below:

Guttman scale is popular in social scaling applications and also while calculating organizational culture, education or achievement evaluation in general.

By including questions that analyze the employee hierarchy such as:

Application 2: This cumulative scaling method can also be used to measure a customer journey.

In this case, the below-mentioned questions can be a part of the scale: