A poll is a powerful tool that political researchers and organizations use to deduce the opinion of a large-scale audience. A well-known example of polling is the election and pre-election polls. These surveys help news outlets, political candidates, and voters better understand which candidate is most likely to win an election. However, polling isn’t just limited to politics. Look online, and you’ll find examples of polls on social media and throughout the web.

Researchers and brands can pose questions online to gather insights and predict the action of consumers through polls. The easiest way to create a custom poll is by using a poll maker.

Let’s take a closer look at polls and how an online poll maker can help leverage research methodology.

What is a poll: definition and uses

Definition: A poll is a systematic inquiry that aims to uncover the attitudes and opinions of a specific section of the population. The goal is to gain insights into the behavior and beliefs of a broader audience.

Polls have been around a long time. The first known poll in America was conducted in 1824. Newspapers and newsletters started polling to track the U.S. elections.

By the turn of the 20th century, the merits of science and sociology were being noticed by the government and political figures. Social statistics became the primary tool to help plan political campaigns and public projects. Manufacturers also began to comprehend the benefits of market research, significantly increasing the popularity of polls and public surveys.

The first public opinion agency was founded in 1936 by John Gallup. It was known as the American Institute of Public Opinion.

From the definition of a poll, we can gather that it is useful in determining/predicting:

Polls play an important role in politics. They can also help brands discover the wants and needs of their customers.

Use of polls in politics: In politics, voting polls are conducted at different stages of the election or the candidacy of a politician. The polls can help political teams analyze public opinion and predict the result of the election.

These days, social scientists are leveraging the power of the internet to create and conduct election polls using a poll maker. Researchers commonly use social media and email as distribution channels for political polls.

In market research, polls are used to gather data that can help determine consumer behavior, values, and opinions. Public opinion polling is also used by NGOs, economists, and activists to collect data about social issues and to measure the public’s attitude towards issues. You can access many free poll maker options online, which makes it easy for any organization or business to create polls for research purposes.

A poll maker is a software that lets researchers and brands create and customize online polls. An online poll maker also lets you export polls to various communication channels – such as embedded on websites or social media. Poll software is easy to use and offers analytic tools to get real-time reports after you create a free poll.

QuestionPro offers a centralized poll creation portal that’s free to use and accessible for large and small businesses. Get started today by signing up for your free account and immediately create free poll questions.

Using an online poll maker, researchers can create stunning polls in minutes. However, to get accurate results, you’ll need to consider your sample audience.

You must carefully choose your audience sample when conducting polls. The type of sampling you use affects the accuracy of your data.

Broadly speaking, there are two types of sampling methodology used for polls:

Probability Sampling is done by using random lead generation. You can further manipulate the sampling by dividing the sample into sub-groups of the overall population for a more accurate poll. As a rule of thumb, the larger the sample – the smaller the sampling error.

Example: Random Digit Dialing (RDD) is the best example of probability sampling. In this method, phone numbers are selected at random, and respondents are dialed to participate in the poll.

Learn more: Everything you need to know about probability sampling.

Non-probability Sampling is carried out without a random sample generation. One example of non-probability sampling is to use a focus group. Participants can opt-in to be part of a poll or the researcher can request an audience depending on the purpose of the poll.

Example: A focus group is an example of non-probability sampling. Participants can be selected based on the sub-group to which they belong and can be evaluated beforehand to see if they fit the purpose of the poll.

Learn more: Everything you need to know about non-probability sampling.

It’s easy to get an audience to participate in your market research focus group when you use our free poll maker.

Types of polls and their functions

Let’s take a closer look at various polls you can create using a poll maker.

Opinion Poll: An opinion poll has one purpose – to understand the opinion of a cross-section of the population on a specific subject.

Benchmark polls are conducted before a product is announced (in marketing) or before a politician announces his candidacy for an election. The purpose of the benchmark poll is to gain insight into a market or political climate before the product or politician becomes public.

Tracking Poll: A tracking poll is conducted at fixed intervals and asks a select demographic about the status of their opinion as a campaign progresses.

Entrance Poll: In politics, it is a poll that voters participate in before entering the voting booth. It offers a researcher data about how a voter will vote. Historically, entrance polls have a lower margin of error and are the final poll before voters cast their ballot.

Exit Poll: Contrary to an entrance poll, an exit poll is taken immediately after the voter leaves the election booth. Exit polls give researchers an idea of who their sampling has voted for and gauges the actual success of a campaign.

QuestionPro is an all-in-one survey software you can use to create interactive and customizable online polls. Embed your poll on websites or share it individually.

QuestionPro lets you create free poll questions in a few easy steps. As a comprehensive cloud-based survey making software, QuestionPro enables you to drag-and-drop questions and elements to completely customize your poll. Live reporting and powerful analytics tools allow you to dig into your poll results and take action to improve your campaign or products.

Steps to create a free and customizable poll:

There are 12 steps to create a free online poll. 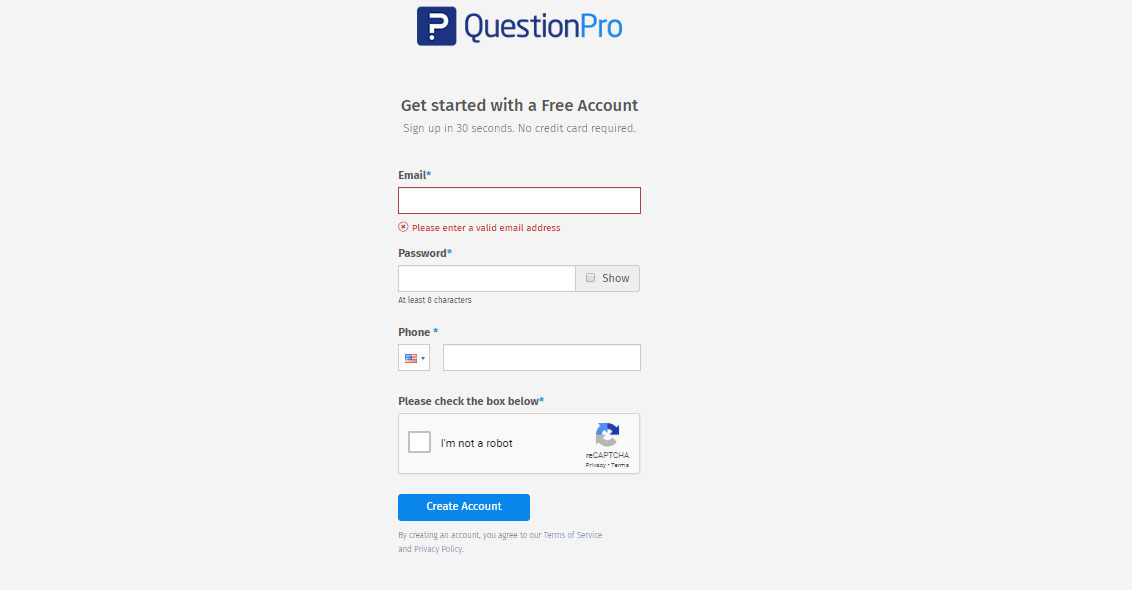 Step 2. In the menu bar on the top left corner – select Polls.

Step 4. Enter the name of the poll and select ‘Create poll’. 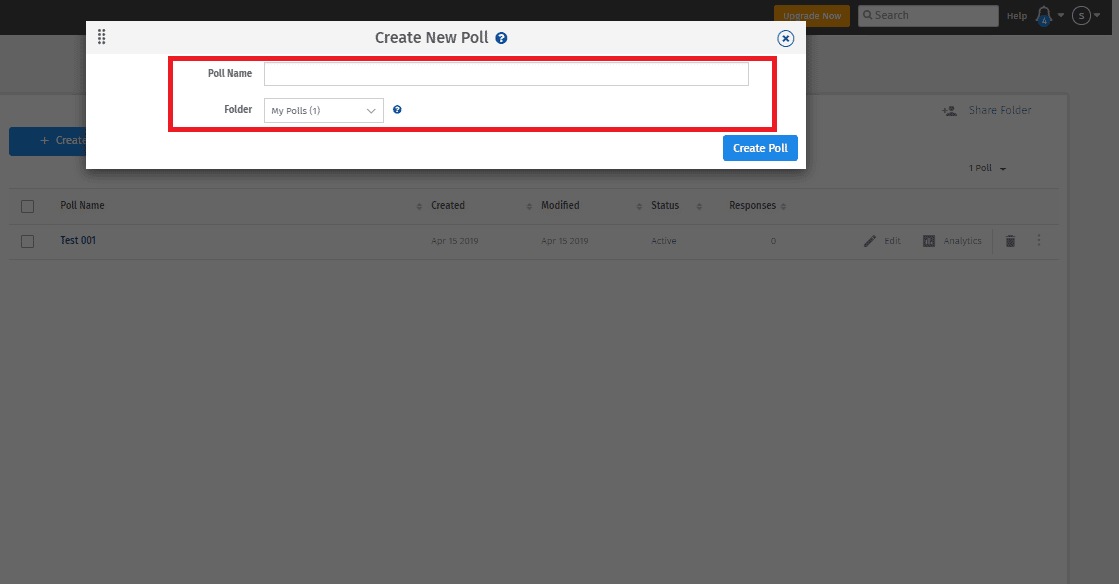 Step 5. Enter the question in the space provided. 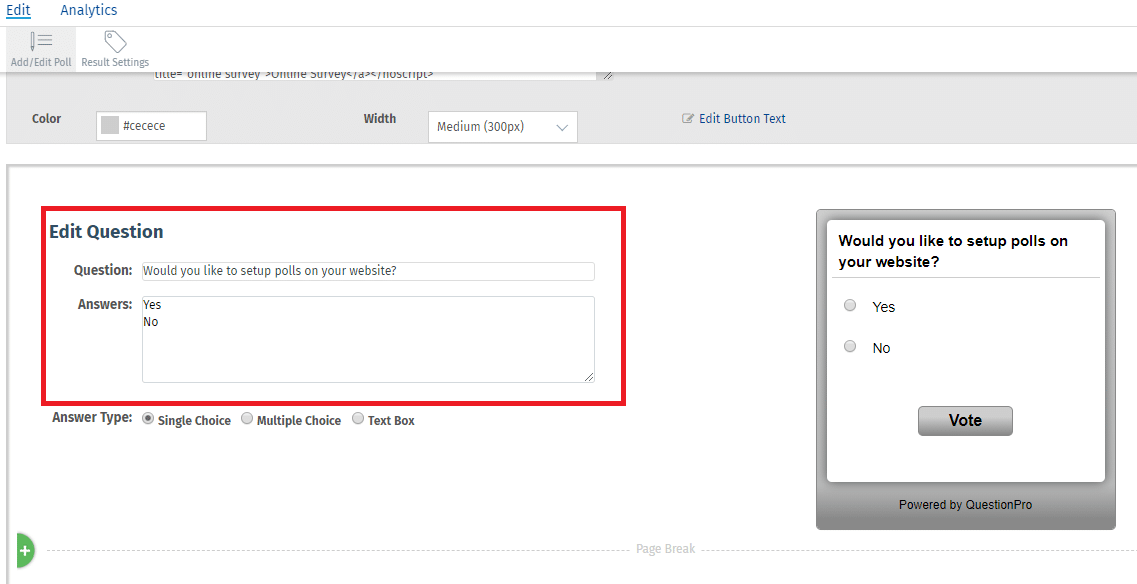 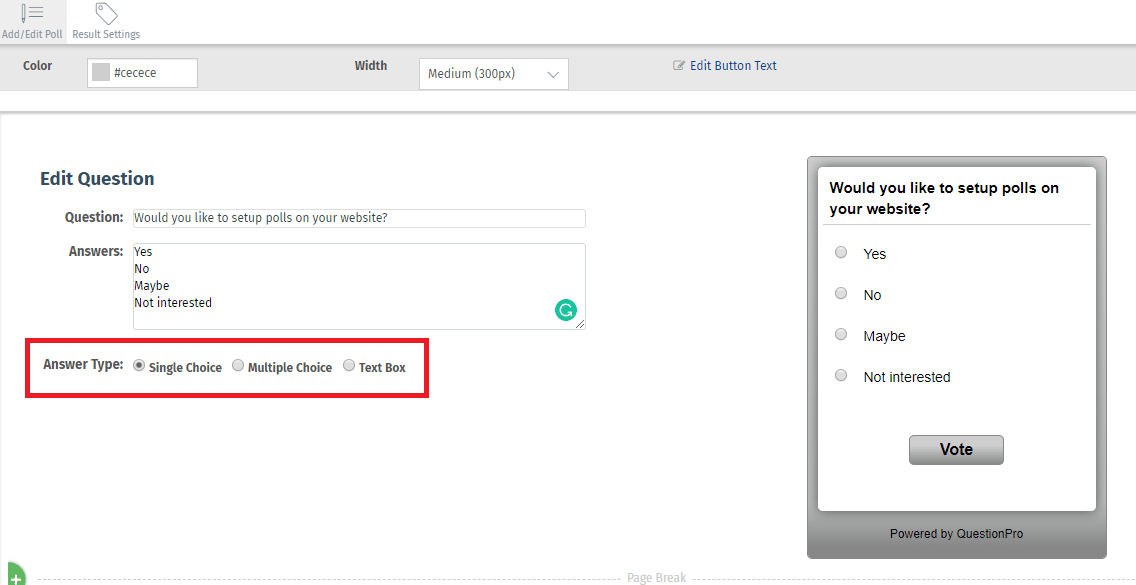 Step 8. Input the answer options in a list format. You can see the preview of the question and options on the right side. 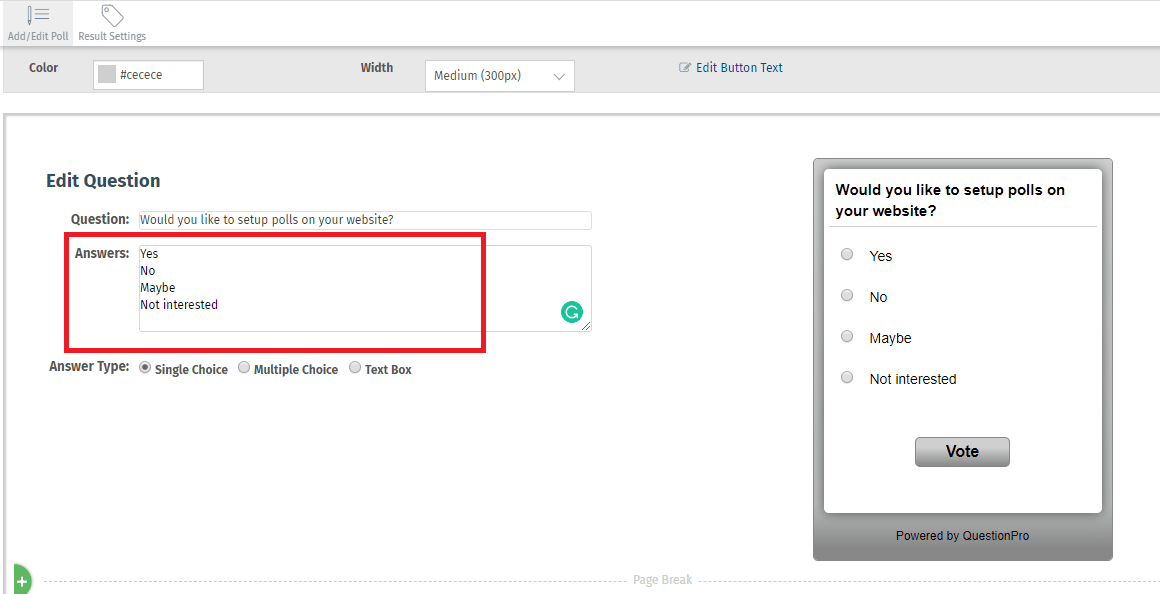 Step 9. Voila! Your poll is created. 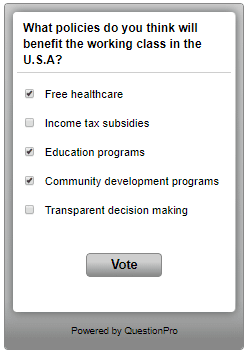 Step 10. You can embed the poll on your website using the HTML code provided or share it via mail or social media. 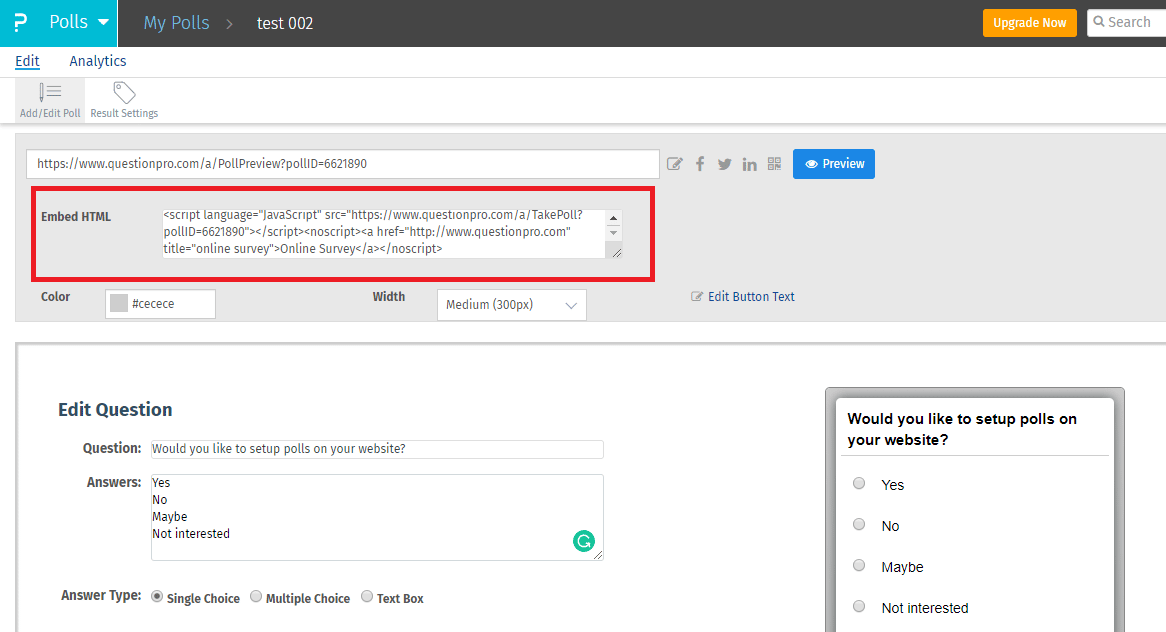 Step 11. To see the reports and status of a poll, click on the Analytics button on the top of the page.

Step 12. The analysis dashboard allows you to see the status of your poll, get live reports, and view charts and graphs of the results. 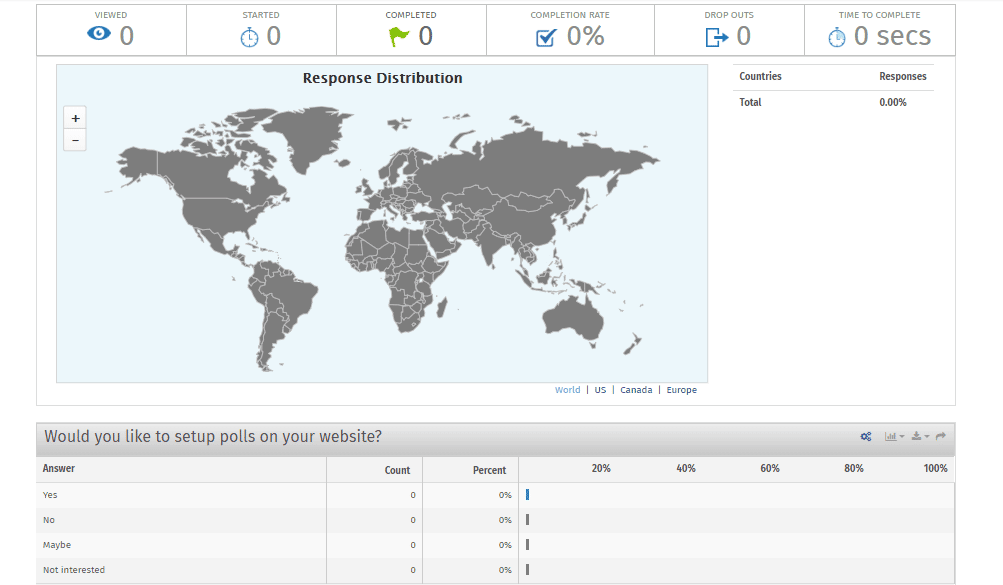 Learn more: How to write poll questions for online polls.

QuestionPro allows you to create polls and surveys, draw live reports, manage an audience, interpret data using formulas and infographics, spot consumer trends, and create a lively research community all in one place. Our free poll maker can help you start gathering the information you need to take the next step in your campaign or product research.