What is a Likert Scale – Definition, example, characteristics, & advantages

What is a Likert scale?

Definition: A Likert scale is a unidimensional scale that researchers use to collect respondents’ attitudes and opinions. Researchers often use this psychometric scale to understand the views and perspectives towards a brand, product, or target market.

Different variations of Likert scales are focused directly on measuring people’s opinions, such as the Guttman scale, Bogardus scale, and Thurstone scale. Psychologist Rensis Likert established a distinction between a scale that materializes from a collection of responses to a group of items (maybe 8 or more). Responses are measured in a range of values.

Example of a Likert scale:

For example, to collect product feedback, the researcher uses a Likert Scale question in the form of a dichotomous option question.  He/ she frames the question as “The product was a good purchase” with the options listed as agree or disagree. The other way to frame this question is, “Please state your satisfaction level with the products,” and the options ranging from very dissatisfied to very satisfied.

Types of Likert scales with examples

The Likert Scale has become a favorite among researchers to collect opinions about customer satisfaction or employee experience. You can divide this scale primarily into two major types:

Researchers use even Likert scales to collect extreme feedback without providing a neutral option.

Researchers use the odd Likert scale to give the respondents the choice of responding neutrally. 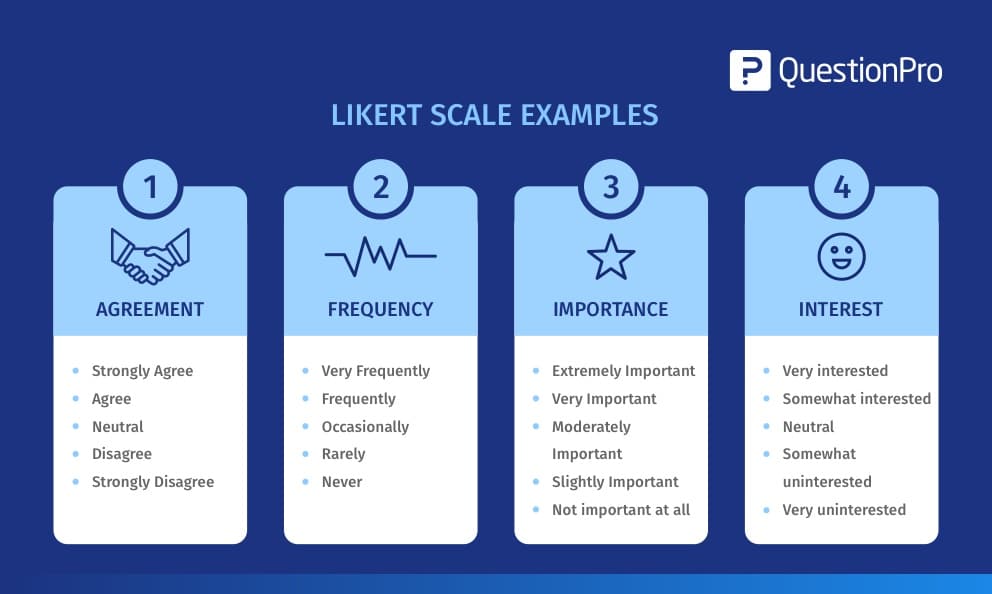 The Likert scale came into existence in 1932 in the form of the 5-point scale, which these days are extensively used. These scales range from a group of general topics to the most specific ones that ask respondents to indicate their level of agreement, approval or, belief. Some significant characteristics of the Likert scale, are:

Researchers use surveys regularly to measure and analyze the quality of products or services. The Likert scale is a standard classification format for studies. The respondents provide their opinion (data) about the quality of a product/service from high to low or better to worse using two, four, five, or seven levels.

Data analysis using nominal, interval, and ratio data are generally transparent and straightforward. Ordinal data analyzes data, particularly in regards to Likert or other scales in the surveys. This is not a new problem. The effectiveness of handling ordinal data as interval data continues to be debatable in survey analysis of various applied fields. Some of the significant points to keep in mind are:

Best practices for analyzing the results of Likert scales

Because the Likert element data is discrete, ordinal, and limited in scope, there has been a long dispute over the most logical way to analyze Likert data. The first option is between parametric and non-parametric tests. The advantages and disadvantages of each type of analysis are generally described as the following:

Which is the best option? This is a real decision that a researcher has to make when deciding to analyze information received from a survey that uses Likert Scale questions.

There are many advantages of using a Likert Scale in a survey for market research. They are:

Want to use the Likert scales in a survey? Do it with QuestionPro!

he Likert-scale survey is a comprehensive technique for gauging feedback and information, making it significantly easy to understand and respond. This is a critical question to measure the opinion or attitude towards a specific topic so that it will be of great help in the next step of an investigation.

With QuestionPro, an organization can conduct an online survey using the Likert Scale. Start by creating a free account and start testing this type of question.

If an organization wants more information about this and other questions within our platform, consult our online chat, tell us about the project, and we’ll gladly offer one of our research tools that best suits those needs.