Can I edit the survey question(s) / answer(s) once the survey is live?

Can I delete question(s) from a live Survey?

Yes, you can delete question(s) from a live Survey. Please note that deleting the Question will also delete all responses collected for that question. Once a Question is deleted the responses cannot be restored. 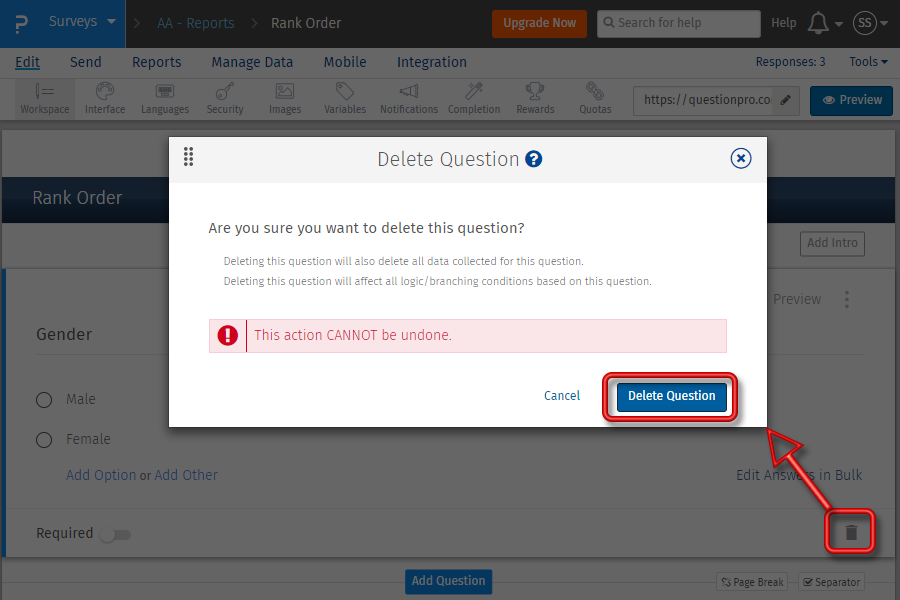 Can I add question(s) to a live Survey?

Yes, Question(s) can be added to a live survey. Data for that question will be collected only from the point onwards after which it was added to the Survey.

Can answer options be deleted / adjusted for live Surveys?

It is possible to delete / adjust answer options on a live survey however we strongly advice not to do so unless absolutely necessary. For example

You have a live Survey with the above question and have already collected some data. In the database the data is scored according to the answer options position in the list. So responses will be stored with scores / weights as follows:

Now if you add another option Phoenix at position two in the list. The Scoring for the rest of the options will change. So now the scores will be as follows:

So for a respondent who answered the survey before the changes were made and had answered Chicago as the city i.e. score 3 would now show up under Los Angeles. The data saved before the answer option was added will be useless for the above question. Therefore if absolutely necessary please add the answer option at the end of the list so that the earlier responses are not disturbed.

Similarly if an answer option is deleted from the middle of the list the scoring for the rest of the answer options is disturbed and the data that was saved prior to the changes were made will be inconsistent.

The survey does not work correctly after I edit the Survey?

Can questions and/or answer options on a live survey be re-ordered?

Yes. However, re-ordering questions will affect the flow of the Survey. Therefore if you have branching in the Survey then the branching will need to be updated wherever necessary.

Reordering of questions and/or answer options will affect your collected data.

Changes can be made to a live survey however we strongly suggest against it. please do so only if it is absolutely necessary and at your own risk.
License

This feature is available with the following licenses :

Was the article helpful?
Yes No

How can we improve it?

Submit
Thank you for submitting feedback.

GET STARTED WITH YOUR FIRST SURVEY NOW

SIGN UP FREE
You may also be interested in... Add / Delete Questions - How to? How can Online Survey Software help me ? What are it's application and uses? - Online Survey Ways to create a survey QuestionPro Privacy Policy

GET STARTED WITH YOUR FIRST SURVEY NOW